Share All sharing options for: Some Thoughts On Day 10 Of The 2011 MLB Playoffs

There's every reason for me to be all about the Milwaukee Brewers right now. Maybe not every reason - they do have Yuniesky Betancourt, after all, and they're not the Seattle Mariners - but there are a lot of reasons. They're an exciting team. They can hit the crap out of the ball, and they can throw the crap out of the ball. They're new, because even though they made the playoffs in 2008 (remember that?), they disappeared quickly, and before that they hadn't been in the playoffs since 1982. They have one of, if not the loudest atmosphere in baseball, with dedicated fans who're always standing and roaring and waving their towels. They have Zack Greinke, who's one of the most interesting and unusual athletes out of all athletes. And other reasons. The Brewers should be my bandwagon team. They're an obvious bandwagon team.

And yet...for whatever reason, I just can't do it. I've tried. I can't. Things'll change if the Brewers go on to face the Rangers in the World Series, since, oh god, no, not the Rangers, but for now I can't bring myself to hop on. When I see Yuni on camera, I sneer. When I see Francisco Rodriguez on camera, I sneer. Nyjer Morgan, Carlos Gomez, sneering. I don't like their cockiness either, which is weird since I normally like when a baseball team shows some personality, but the Brewers' attitude rubs me the wrong way. I don't know why it does, but it does. Maybe I'm 56 years old. 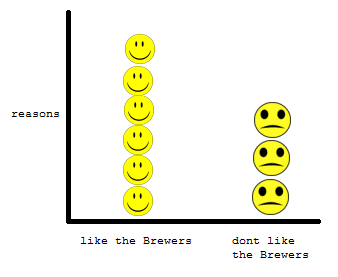 Given anything - a team, a restaurant, a person, a squirrel - it seems to me that something will click in your mind pretty quickly, and the decision will be made whether you like that thing or not. I don't know how this decision is made, but it's made, and the rest of the time is spent finding reasons to justify it. With anything, there are reasons to like it and reasons not to like it, and depending on how that inner switch clicks, you'll either end up focusing more on the former or the latter.

I guess my mind pretty quickly decided it wasn't going to bandwagon the Brewers. I don't understand why it did that, but it did, and now I'm just looking for reasons to root against them. It's out of my hands. My brain made a choice, and I'm living with that choice. It's weird, but it is what it is, and I guess I shouldn't expect my brain to work rationally when thinking about sports given that the whole exercise of liking sports in the first place is irrational. There's no good reason for us to give a shit, but we give a shit, and given an irrational foundation, it only makes sense that one would construct an irrational building of irrational parts.

Liking players, liking teams, liking sports, liking anything: it's irrational. I think. I'm pretty sure. Sometimes the mind can be changed, but most of the time it cannot. I'm wondering now if one can learn to become more open-minded, or if everybody has a certain open-mindedness level around which they hover for the bulk of their life. This is really straying off-topic. Baseball! The Brewers are neat, but I'm not into them right now! All right.