First On The Field

Share All sharing options for: First On The Field

I've been trying to think of something to write about Doug Fister since last night. He was, after all, the winning pitcher in the Tigers' victory over the Yankees in their decisive Game 5. It felt like there had to be something there, something new for me to say that other people weren't saying. But, as you might have noticed, I've had trouble finding an angle. Complicating matters is that I feel kind of sick, and am stuck in a brain fog, staring at the Marlins' home run feature and trying not to throw up. But also complicating matters, complicating matters more, is that the ideas that have been coming to mind are no good.

Last night, it's not like Fister was outstanding. He was good, against a tough lineup in a tough ballpark, and he allowed one run in five innings, but he threw a ton of pitches in those five innings and had to work out of trouble. He left a lot to the bullpen. There's nothing original and compelling I can say about Fister's performance.

There's nothing new for me to say about the Yankees losing in the playoffs, and losing at home. I just wrote about the absence of the Yankee Stadium ghosts after Game 2, and the Yankees' failure has been the hot topic of the day. This angle has been pretty fully explored.

It's already been established that a lot of Mariners fans are rooting for Fister to succeed. Probably more than are rooting for Adrian Beltre to succeed, because Fister was a Mariner more recently, he was cheap, and nobody perceives him as an overpaid bust. Beltre was beloved here, on this website, but he wasn't beloved everywhere. Fister was beloved everywhere, or at least not not beloved.

And so on. It's been this frustrating struggle, because I feel like there has to be something worth saying, and I can't for the life of me find it. And pretty soon it's all going to be irrelevant anyway as we turn our attention from what already happened to what's going to happen. The Tigers beat the Yankees last night. The Tigers play the Rangers tomorrow. Sometime, sometime soon, we're going to stop thinking about one, and start thinking about the other.

So instead of going anywhere with this post (sorry), I thought I'd close with a screengrab taken immediately after Jose Valverde struck out Alex Rodriguez for the final out. 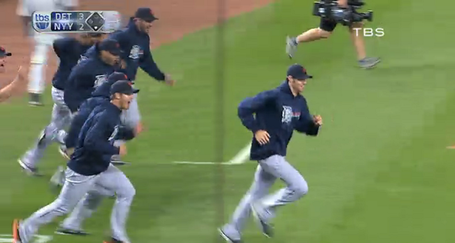