An Unforgettable Stretch Of Anthony Vasquez

Share All sharing options for: An Unforgettable Stretch Of Anthony Vasquez

This might all end up sounding really mean about Anthony Vasquez. I don't know yet. I don't have a plan for where this post is going as I'm sitting here, writing this post. I've just had Anthony Vasquez's numbers and performance on my mind since a few weekends ago, and I felt like something more had to be said, if only to provide some closure for what we all went through.

The idea behind Anthony Vasquez was a good one. The thought process was sound: late in the year, the Mariners wanted to shift from a five-man rotation to a six-man rotation, to give all of their starters - and especially Michael Pineda - a little extra rest. Nothing wrong with that in a dead season. In a season like the one the Mariners were having, you want to develop, but you also don't want to push too hard. There's no reason to push too hard.

So there was nothing wrong with the idea. I wouldn't even say there was anything wrong with the initial execution. Simply put, the Mariners didn't have a better sixth starter option than Vasquez. Chris Seddon hadn't been good in triple-A. Nate Robertson and Luke French hadn't been good in triple-A. There was no sense in rushing, say, James Paxton, and Tom Wilhelmsen was turning into a dynamite reliever. So Vasquez it was.

Vasquez wasn't on the 40-man roster. He was considered to be a non-prospect, which sounds kind of insulting for a then-24-year-old, but is meaningful nevertheless. But he'd made eight starts in Tacoma, and over those eight starts he'd allowed just 22 runs, with 18 walks. While he hadn't been great, he'd been passable, and it looked like he could come up and eat a few innings every now and again without completely embarrassing himself.

But then he came up and pitched. Immediately, we all thought "wait, really?" And it's interesting to go back and read some of the quotes from Eric Wedge and Carl Willis along the way. It was clear that Wedge didn't know a whole lot about his new pitcher before he arrived, and Wedge was probably just as caught off guard as we were.

See, Vasquez is a soft-tosser. He's always been a soft-tosser. There's a reason he lasted until the 18th round in the draft, getting picked 533rd overall in 2009. The best player ever picked at #533 is...well it's Mark Trumbo, but behind him there's not much. The thing about soft-tossers is that they're usually described as having good control or good command. The thing about Anthony Vasquez is that he doesn't have particularly good control or good command.

This is a bad recipe for a pitcher. 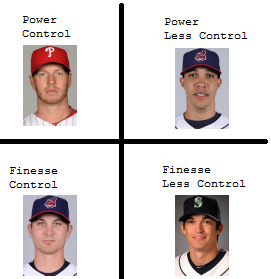 (The guy in the lower left is Josh Tomlin. I wouldn't recognize him either. Who would recognize Josh Tomlin?)

So Vasquez was up against it from the beginning. It's funny that his Major League career began with something of a highlight, as he won his first-ever game. The Mariners beat the Indians 12-7 in the second half of a doubleheader. Vasquez, granted, had allowed two homers and six runs in 5⅓ innings, but he won his debut, and it was tempting then to write off his ugly line as being due at least in part to rookie jitters.

That was his good start. Or "good" start, depending on your standards. On September 11th, at home against the Royals, Vasquez allowed two runs in six innings. He struck out two batters and didn't walk anyone. He lost that start, 2-1.

By the end, even beat writers were joking that Vasquez might be the worst starting pitcher ever, given his lack of stuff and the fact that he'd allowed multiple home runs in five of his seven turns. And you could argue that, as of right now, Vasquez is the worst starting pitcher ever, at least statistically, because he has the highest FIP of all time. Vasquez went into his last start of the season with the highest FIP of all time, and he was just bad enough to keep it where he was. It's both incredible and not at all surprising.

My favorite thing about Anthony Vasquez's season - and, to be honest with you, the whole reason I decided to write this post - isn't just that he finished with the same number of home runs allowed as strikeouts. That's a big part of it. That's insane. But Vasquez went and took it to the next level.

Boom. Lucky number 13 for all three categories. It is just an impossibly, unthinkably terrible stat line. Vasquez was in way over his head and in almost any other organization wouldn't have had to go through this, but he went through this, and that's what he did, and that can never be taken away. That can never be stricken from his record.

I don't know if I've ever watched a worse pitcher than Anthony Vasquez in the Major Leagues before in my life. I don't think I'm going to forget what it was like. Now I have to try to figure out what I'm rooting for. I could root for Vasquez to develop and turn himself into a big league contributor down the road. That would be neat. That would be a neat redemption story. But I could also hope - rather mean-spiritedly - that he remains in the minors forever, so as not to spoil the anti-perfection of what he's already done. 13 home runs. 13 strikeouts. 13 walks and hit batters. And the worst FIP in baseball history. It's like art. You don't mess with art.

I never expected anything out of Anthony Vasquez. I never thought he'd make much of an impression either way. Since the end of the season, he's the only Mariner I've been able to think about. This game will surprise you.