Share All sharing options for: Mariners Grooming Next Willie Bloomquist

Well, no fear. They may not get the actual Willie Bloomquist© back, but they appear to be developing a reasonable facsimile. Scott Savastano is not a Seattle-area product, but he might be on his way to building his own network of ardent supporters from the group of people who love versatility above all else. Drafted in the 28th round (grit points!) by the Mariners in 2008, Savastano has now completed his fourth professional season, repeating at Double-A this year playing mostly a mix of second and third base. He's not doing poorly and in fact, has bettered the league average everywhere he's played, but that is not what caught my eye. Rather, it was this 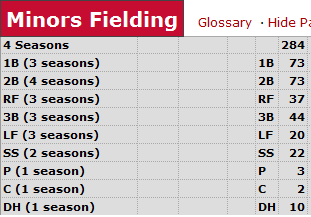 Savastano has played every position aside from center field! Savastano went through most of these in 2009 with Clinton, but has moved around quite a bit in other seasons and teams as well. And this isn't some totally fluke check box either, he's played twice at catcher. He had three appearances as a pitcher for Jackson this season. Three! With no earned runs allowed!

It's easy to write off all the above as a mere tongue-in-cheek faux boosterism of a organizational depth player, but it's not all faked. Savastano is already 25 and is not likely to become an impact, All-Star player at the Major League level, but a Willie Bloomquist-type career certainly isn't out of reach and the truth is that players like Bloomquist are useful. Much of our derision for him came from the inordinately high opinion some very vocal fans had of him. Savastano can make contract, he can draw walks and he's not entirely powerless. If he continues that trend, he might prove a valuable flexibility asset on a Major League roster depending on the quality of defense he offers over this wide range of positions. I know I'll be rooting for him next season. Quirky guys are fun until they become Brian Wilson.