An End of Season Light for 2012's Bullpen

Share All sharing options for: An End of Season Light for 2012's Bullpen

It is time to finish up the series preview-based reviews of the team's units. Hit it, relievers! No, wait! Don't hit it. Hitting is bad for pitchers. Um, miss it? Bats I mean. Also, hitters. Don't hit bats or hitters. But don't miss your spots either. This is so confusing! 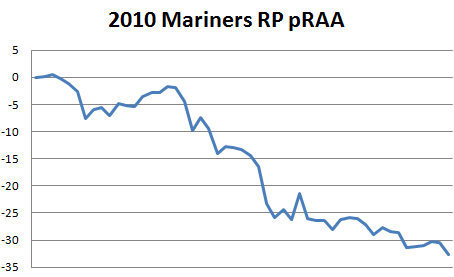 Ah, that false hope as the 2010 team hovered around interesting before collapsing faster than the Greek economy. Here is this year's: 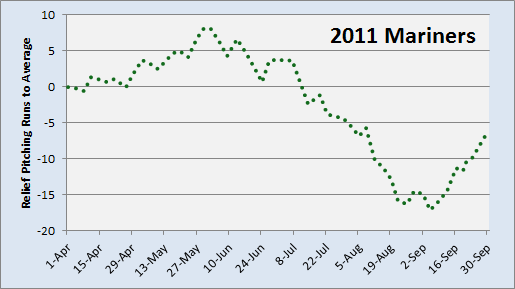 As noted in the previous posts, the 2010 year-end mark was left off the graph which would have dragged that team down below -35 runs in the bullpen. This past season's incarnation certainly fared better though that might have been only because of the arrested fall and subsequent recovery over the season's final six weeks. While this year's edition of the bullpen was, at ~every step, superior to last year's, the two were not very far apart in terrible in mid-August.

And then it turned around, gaining roughly ten runs in a month, which is a significant achievement for a bullpen. The encouraging sign is where those gains came from. Brandon League, Tom Wilhelmsen, Josh Lueke and Shawn Kelley were the main positive contributors down the stretch. The unit's 3.51 xFIP during September ranked 10th in all of baseball. That's obviously a mediocre sample with just 80-90 innings for most teams during that span. I'm not using September's numbers to declare that 2012 will feature a top ten bullpen. However, good numbers are better than bad numbers, no matter the sample size and a revamped Wilhelmsen, a Lueke that can reach the mid-90s and a healthy Kelley are good for our hopes.