If anything, 2011 was the year that I decided to fetishize digging into defensive metrics. It resulted in me falling out of love* with UZR based on how poorly they were rating the Mariners as a team while the team's run prevention was stellar and the results-based fielding outcomes (e.g. team BABIP against) were among the league's best. I dug around, I mused, I tested and I eventually detailed my thoughts here and here about building a team-wide metric that I felt comfortable with.

*It was never actually love. I'm sorry, UZR. I was just using you. I felt nothing the whole time.

I still do not feel great about individual player measurement, but ultimately that's okay because I don't actually work for a baseball front office. Why should I do their work for them? Anyways, here is the 2011 graph of the team's fielding performance: 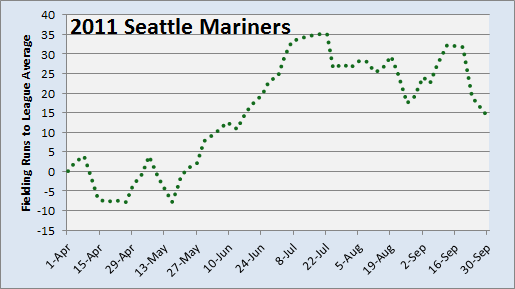 Franklin Gutierrez appeared for the first time this season on 18 May. Again, I am not satisfied with making player-specific comments from a team-focused metric, but dude might be good. Unfortunately, the team's defense absolutely cratered when Dustin Ackley was promoted to take over the second base job in mid-June. Oh, wait, no, the team continued making substantial defensive progress. In addition to the numbers, Ackley's visually graded out adequate to good in the field in direct contrast to what many people declared. There are lessons therein.