Throwing the Bums Out

Share All sharing options for: Throwing the Bums Out

The 2011 Mariners' offense ended up performing similarly to the 2010 squad to the point that it might have caused a strong feeling of déjà vu, but it was more like a remake than a repeat. The plot was the same, but the actors were mostly different. While comparing the two squads, I took note of how many of the dregs on the 2010 team (Rob Johnson, Casey Kotchman, Ken Griffey, Josh Wilson, Jose Lopez) were tossed aside in 2011, mostly replaced by new dead weight. It seemed like a lot, so I graphed it! I like graphs. 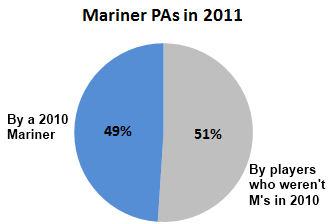 The 2011 Mariners had 5,972 plate appearances. 2,924 (49%) of them were taken by a player who was a Seattle Mariner (on the big squad, not just within the Mariners' organization) during the 2010 season. Phrased another way, over half of the team's hitting chances in 2011 went to new players. And they still sucked.

I don't know how this 51% turnover rate compares with other teams or times. I have not found a systematic way of measuring it and I'm not going to go do it by hand for other teams. You might be interested to note that roughly 24% of the 2011's plate appearances were taken by players who are already no longer part of the organization. However, I am unsure that the number will climb significantly higher than that by this time next year. The 2012 team seems more likely to put the players acquired this season to greater use rather than completely replacing them again. That's not a bad thing on its own. Or a good thing for that matter. The team doesn't need different players, it needs better play regardless of who it comes from. Hopefully the returning players find better success than seen by this year's crop.