Share All sharing options for: Brendan Ryan In 12 Pictures

We include a lot of pictures with our posts over here. There isn't a picture in all of them, but more often than not, you get a pretty little action rectangle tucked into the upper-right corner. As you might imagine, we don't do the finding and formatting ourselves; rather, there's a handy photo widget included within the editorial window for easy picture selection, cropping, and placing.

The photo widget gives us (limited) access to the AP and Getty image archives, and - even better - it's searchable. By keywords, by date, and by league. After running a search, results are shown 12 images at a time, with the most recent images coming first. Something I've thought about on and off over the past few weeks is whether the first 12 images might ever be representative of the player or team in question. It's hard to explain and it's a stupid and silly experiment, but I'm going to try it out anyway with Brendan Ryan. Behold: Brendan Ryan. 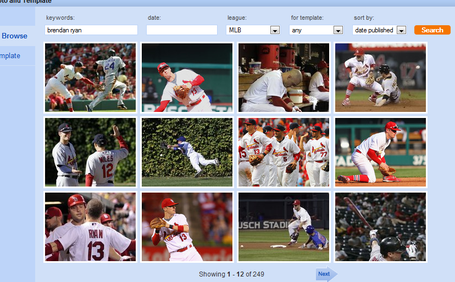 (3) Here we see Ryan sitting alone on the dugout bench, staring mournfully at the ground. He has presumably failed at something, and is intensely upset about it.

(4) Here we see Ryan moving quickly to cover second base on a steal attempt, but the ball has escaped behind him, indicating failure. Hustle and failure.

(6) Here we don't see Ryan, but rather an opponent attempting a diving catch on a ball off Ryan's bat. The opponent is unsuccessful, meaning that Ryan is successful, and it was additionally a hustle play.

(7) Here we see Ryan again giving a series of teammates a series of congratulatory high-fives. Similar to #5, only in a group setting, demonstrating less leadership but more amiability.

(8) Here we see Ryan down on one knee attempting to receive a groundball, but failing. That Ryan got his body in front of the ball implies that it was easily fieldable.

(9) Here we see Ryan delivering a congratulatory chest bump to teammate Matt Holliday. The chest bump is more intimate than the high-five, so compared to #5, Ryan demonstrates similar leadership and increased amiability.

(10) Here we see Ryan taking a crow hop before preparing to throw a ball to first base. The crow hop implies ease of play, and a slow baserunner.

(11) Here we don't see Ryan, but rather teammate Skip Schumaker coming up unable to handle a terrible, low throw from Ryan at short. The throw is a failure on Ryan's part, but the fact that it's so terrible suggests that Ryan was off-balance when he made it. Probable hustle play.

(12) Here we see Ryan following through on a long, looping swing and staring straight ahead, suggesting a groundball up the middle. Baseball-Reference confirms that he grounded out to the pitcher. Failure.

So that's all 12. I could continue to the next page, but that isn't part of the experiment, so let's see what we have. In all, we've got:

What do we know about Brendan Ryan? He's an intense, animated, likable guy who hustles all over the place and occasionally succeeds, but fails a lot. Therefore, I hereby declare this experiment a resounding success.