Somewhat on a whim, we decided late last week to dart up to Seattle for my first-ever Fanfest. I'm not really an autograph kind of guy, and many of the scheduled events and activities weren't put together with people like me in mind, but for the low cost of $10, it was something I had to experience at least once. Short summary: totally worth it.

We didn't do everything - we couldn't do everything within the span of a few hours - but while I don't think I had any life-changing experiences, I can't think of many more enjoyable ways to spend a Saturday afternoon in January. After talking to a handful of people, my understanding is that, regardless of the quality of the team, the Mariners work hard to put on the best Fanfest in baseball, and based on my one experience, I can buy it. Matt Pitman spent two days hosting the Last Fan Standing trivia game through a sinus infection. There was a guy with a microphone in the batting cage announcing each hitter and narrating every pitch, and he was in there from 9-4. The biggest heroes may have been the people who volunteered to catch fans young and old pitching off the mound in the bullpen, the horror of which you can probably imagine. A ton of effort goes into this weekend every year - not just from team members, but from employees and volunteers - and the end result is a product they can be proud of.

Oh and on a completely unrelated point, here's what the center field honeycomb backdrop looks like. 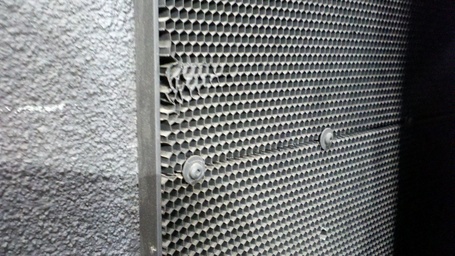