Mariners To Replace Dave Niehaus With Familiar, Inferior Voices In 2011

Share All sharing options for: Mariners To Replace Dave Niehaus With Familiar, Inferior Voices In 2011

What was once speculation has now been confirmed. Via Greg Johns, the Mariners will fill Dave Niehaus' spot with a pool of guys who have worked in the booth in the past.

Randy Adamack, the Mariners' vice president of communications, confirmed Wednesday that the club will employ at least five announcers with prior experience in the booth on a rotating basis to work primarily with Rick Rizzs on radio broadcasts for the upcoming season.

Although it isn't stated in the story, this arrangement will presumably only last through the 2011 season, after which the search for a more full-time replacement could begin in earnest. The organization has evidently decided that it didn't want to force a new voice into the uncomfortable position of trying to replace Niehaus right away.

Who are the five announcers?

Ron Fairly: Fairly worked with Niehaus and Rizzs for 14 years, and will continue seizing every opportunity to tell the listener that, when there are runners on base and less than two outs, an infielder should drop any fly or line drive hit right to him.

Ken Levine: Levine was a member of the booth in the early 90s, wrote for The Simpsons, and created the series Almost Perfect starring Nancy Travis and Kevin Kilner. The sitcom Almost Perfect is not to be confused with the sitcom Less Than Perfect, which you've also never heard of.

Ken Wilson: Wilson was apparently Niehaus' original partner with the Mariners, and must be a thousand years old. 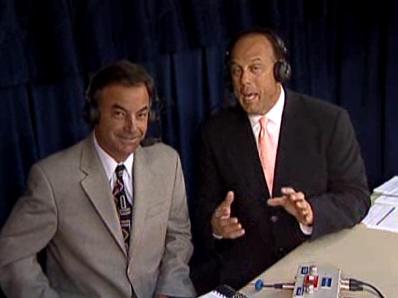 Dan Wilson: Wilson's hung around as a color analyst, and after seeing him up close I can tell you for a fact that he looks the same age now as he did on the day he retired. He might even look younger. About ten years ago I remember my mom thought Dan Wilson was attractive. Now women my own age are beginning to think he's attractive. Dan Wilson has something figured out.

The Mariners may choose to add a name or three to the rotating pool, like Dave Henderson and Jay Buhner, but these are the five they've locked down. And, personally, I approve. It's good to get some familiar voices to show up in Niehaus' absence, and while I don't think any one of them is exceptional, the rotation should keep listeners from growing bitter or weary.

The other bit of news that might get lost in the rotation announcement is that the TV/radio shuffle looks to be a thing of the past. Most of the time, Mike Blowers and Dave Sims will now remain in the television booth for all nine innings, while Rizzs and the guest announcer of the day stay on radio. So for those of you who've followed the M's on TV, Niehaus is essentially being replaced with more Sims. Those of you who've followed the M's on the radio, meanwhile, will have the two Daves replaced with the rotating guests, with Rizzs handling the bulk of the play-by-play.

I doubt this news is going to make many people happy. There's no right way to replace Dave Niehaus. But there is a best way, and, for now, I think the Mariners have found it.