Hey People, it's a New Year

Share All sharing options for: Hey People, it's a New Year

About a month ago, I was wandering around a Barnes & Noble retailer browsing for gifts and generally just amusing myself as I am wont to do in bookstores. It was not supposed to be a trip that provided me with any humor. I was just attempting to find more books to add to my library hold list.

And then lo and behold came a treasure of innumerable words. The 2011 Seattle Mariners team calendar. I made the expected cracks about sales coming off such a disgusting season but out of curiosity, I took a look at it to determine which players they chose to highlight.

Quick, which 12 might you pick? Your goal is to balance notoriety with timelessness. This calendar has to last through an entire season and has to feature players that people know and feel positive about. Suffice to say that Josh Lueke is not likely to move a lot of product during this past holiday season. It's not such an easy task since the team, being awful last year, has and will continue to undergo a lot of turnover and has few players that merit calling attention to.

You must take great care to predict which young players might make a big enough splash by the time their respective month comes around to make them worthy. Michael Saunders is a good bet to get another year of opportunity to prove himself and his hustle and good defense makes him easy to identify. Justin Smoak would be a slightly riskier proposition but a sound one I think given the team's depth at first base. And so on.

I know it is difficult to make out at this size so feel free to click through for a bigger version that is still difficult to read. Below the image, I list the players. As seen on the racks of your local Barnes & Noble retailer: 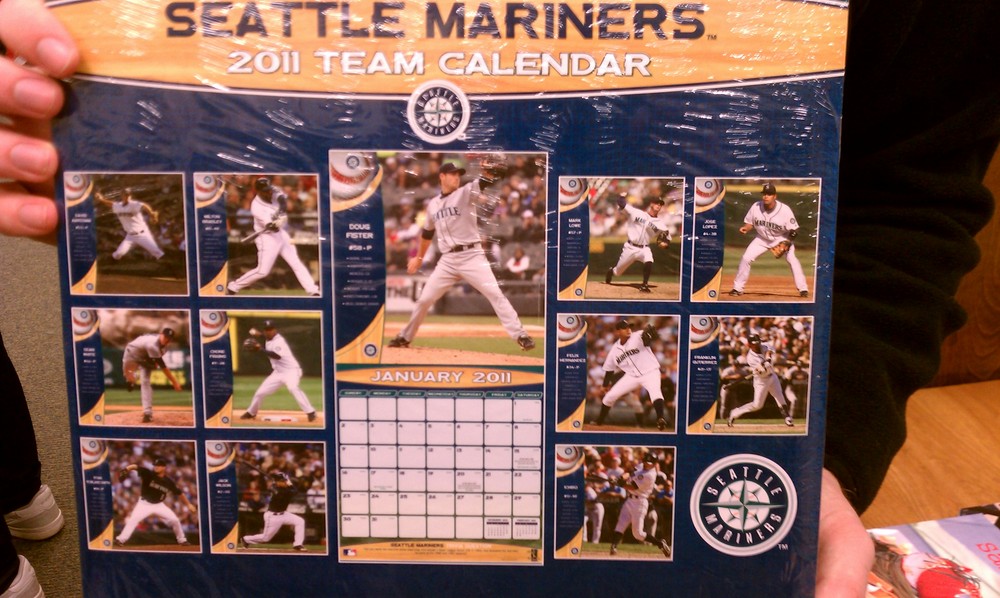 On December 31st, before you could even make use of any part of this product, 25% of the players featured were no longer Mariners.

Sean White has now joined Lowe, Lopez and Hyphen as a member of the ex-Mariner club. And rightfully so as he was downright awful in 2010. He was bad in 2009 too of course, but he had a shiny 2.80 ERA so if this were a 2010 calendar, it might be understandable.

David Aardsma is on the shelf. Milton Bradley is buried on the depth chart and a release candidate. Jack Wilson spent 2010 contemplating retirement and the Mariners have been busy this winter bringing in as many cheap short stop options as they could find. I'm actually a bit surprised Griffey didn't get a month.

At least it does include the only legitimate stars on this team. And Felix gets to be on October which is probably the only time in 2011 that Felix will get to be associated with pitching during that month.

Honestly, I might bet that a 2010 Tacoma Rainiers calendar, if it existed, would come out better than this at featuring 2011 Mariners. Only once have I ever seen a forward-looking product rely so heavily on the past and fail so spectacularly.