Share All sharing options for: Notes From Event Weekend

First and foremost, in some order, but not enough order to interpret, thank you to:

A fine weekend was had by many, and for those of us who played softball, we have the sun-kissed exterior (and, in Jaejo's case, the scars) to prove it.

But what I know people want to hear about most is the Safeco event and Q&A, so no more dilly-dallying. Unlike previous events, which have taken place in locations from a pizzeria to the library to symphony hall to Ellis Pavilion, this one was held over a few sections in Safeco's upper deck a number of hours before a game. While it was a little difficult for those of us in front to look up, and while the acoustics weren't the greatest, what I loved was how, for the first time in the history of these things, our surroundings actually screamed 'Mariners baseball' (ed. note: forgot about the Cheney Stadium event a few years ago, but, Rainiers). It put everyone in the right frame of mind, and if ever you didn't care about a particular question, or if you got bored, you could look around the stadium and watch the field, where the Mariners were stretching and taking batting practice. A number of people have said their favorite part was just sitting back and taking everything in. Not just the questions and answers. The whole experience. It was a very suitable setting.

Of course, the one drawback of doing this with players on the field was that we couldn't be sure what the players could hear. I'm pretty sure they couldn't hear anything - they were on the field with music playing, and we were in the upper deck with speakers pointed the other way - but there was no knowing, and as such on a few occasions certain things were said that I felt were inappropriate. On the plus side, no one wound up complaining, so either they didn't hear, they didn't care, or they're scheming.

The duration of the Q&A was more limited than these things have been in the past. At Benaroya Hall, for example, the M's guys stuck around for three hours. This time we had about 45 minutes with Jack and an hour with Tony and Tom - a function not of their willingness to talk, but rather of their schedules. What that meant was that we had to fit as much as we could into the time allowed. The instant they showed up, we cut off the unsurprisingly minor league-heavy blogger Q&A and went straight to the important people.

And they were asked the questions you'd expect them to be asked. Brandon League came up. Wak and Griffey came up. Josh Lueke came up. The front office reps weren't given softballs, and their answers were accordingly measured and careful. There were no bombshells dropped. You'd never come to one of these things expecting a bombshell to be dropped. This front office is very deliberate in everything it does, and it keeps most things pretty close to the vest, so one of the real highlights is trying to read between the lines and find substance in the equivocation. Ms. Jeff and DMZ each noticed some interesting body language during the Lueke answer, for example, which may or may not have hinted at something. Sports fans love to analyze and speculate.

If you're wondering, they stuck with what they said about Lueke, and Jack had no interest at all in talking about the Wakamatsu/Griffey situation. Which, well, is fair, since further explanation wouldn't do anyone any good. There's nothing to gain from learning more about what went on. We can't apply those lessons to the future. That was a one-time circumstance, and it's passed.

Answers to questions about the minor leagues were more illuminating, and you can tell that everyone in the front office is pretty proud of the talent stockpile they've built up in the system. There were all the obvious names, and some less obvious names, like Kyle Seager and Johermyn Chavez. We were told we were going to love some of the guys coming up, and while the focus on the prospects may have been in part out of necessity, that doesn't make them wrong. The big difference between the 2008 Mariners and the 2010 Mariners is that the 2010 Mariners have young talent on the rise.

Jack closed with a statement of appreciation and remarks on how the future looks bright, and about 15 minutes later, our time was up with Tom and Tony as well. Or, at least, we thought it was. People headed over to the mixer area, and to our surprise, Tom and Tony followed along so they could chat in a less formal setting. If there's one thing we can say for absolute certain about a lot of these guys - Tom McNamara, Tony Blengino, Pedro Grifol, Carmen Fusco, etc - it's that they love to talk about what they do with people willing to listen. They all share an indefatigable passion for their roles within the game, and it's refreshing to experience.

The mixer was held on an upper deck patio, and t-shirts were handed out at a makeshift counter in the front. Inside, we gathered in our various and varying circles for an hour and a half, and as rare a treat as it is to get time with the front office, I also have to say it's just a lot of fun to shoot the shit with readers in a non-virtual and non-threaded setting. It was sufficiently enjoyable that Mariner Housewife and I talked a bit about hosting some sort of get-together in Portland before the end of the season, so you should let me know if you'd be interested in hanging out with me and Mariner Housewife somewhere in Portland, doing something.

Finally, after the mixer, we headed in for the baseball game, which was bad.

Until next time. These things are always a blast. 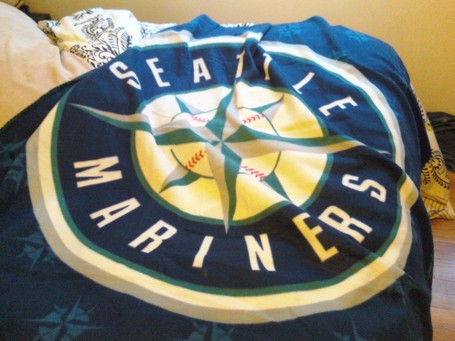 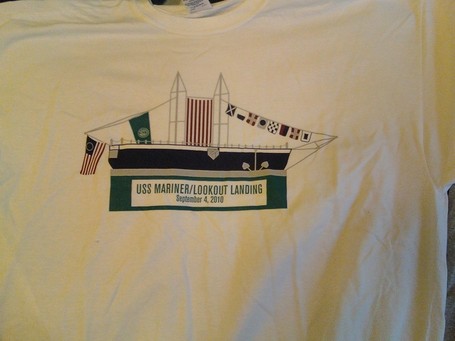 Pictures of the event itself, I'm sure, will show up shortly, if they haven't already started trickling in.