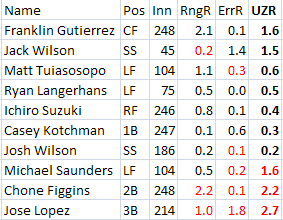 The gloves were a bit better in August than they were in July but still ended up below average. Ryan Langerhans is still awesome. Jose Lopez is still playing.

This should probably still be an F, but I felt I had to bump the grade up a skosh just to illustrate how poor they were in July. Being 29 runs below average is bad, but seems puny when coming off a month that saw the team total be closer to 60 runs below average.

We just cannot have more than one hitter at a time that is capable of hitting home runs during a particular month.

It was nice to see Ichiro put in a more traditionally Ichiro month with 38 hits and a low strikeout total compared to his 29-hit, 20-strikeout month of July. Ichiro has played in every game so far this season and if he keeps that up, is on pace to end the season with 209 hits, comfortably clearing the 200 barrier for the tenth consecutive season. You don't appreciate Ichiro enough. Appreciate him now! Before he's gone and our lead off hitter is Joey Cora Jr.

The troubling trend continues for Russell Branyan's contact rate which was just 62% in July and improved only to 63% in August. He's at 63% overall with Seattle this year, down from 66% last season with us and even that number was dragged down by his poor end of the season when the back injury really took a toll. The walks were up this month, but I'm skeptical about Branyan's ability to be a big presence in a 2011 lineup. At the least, I wouldn't pencil that DH hole as filled just yet.

Tui hasn't been awful. How about that?

Maybe Jose Lopez meant that he wanted to draw 50 walks total between 2009 and 2010. He's still short of that goal.

Chone Figgins' BABIP-related bad luck has seem to abated and we are still left with his troubling lack of extra base hits and --likely related-- a worse strikeout to walk ratio than would be expected given his plate discipline. Figgins needs to start being a doubles threat again whether by hitting the ball with more authority or by stretching out more singles. C'mon Chone, if someone is going to be reckless on the base paths I'd rather it be you than Casey Kotchman.

Franklin Gutierrez was victimized in July by a horrendous .177 BABIP. In August he simply sucked. 21 strikeouts and just two walks? It's like he's already trying to fill the upcoming Jose Lopez vacuum.