Buster Olney talked about Morrow's development in his post this morning, and hit on two things that Morrow and his coaches believe led to his improvement following a miserable start against Boston in May. One:

After Morrow's start in Boston on May 10, [pitching coach] Walton suggested that Morrow lower his arm angle, from over the top to a high three-quarter delivery -- a change of "about five inches," Walton said.

We can see this change by looking at the release point data captured by PITCHfx. Using those handy charts from Texas Leaguers:

Morrow through May 10th 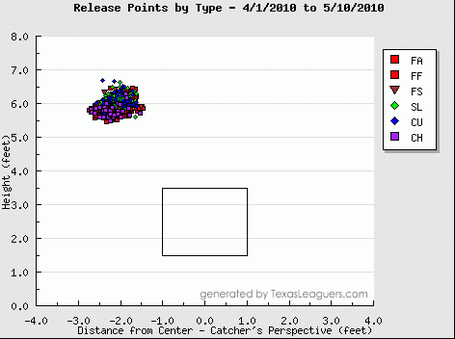 Morrow after May 10th 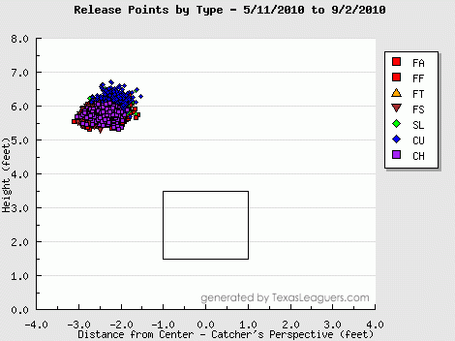 It's a subtle change, but if you open the two images and cycle back and forth between them, you can see it. Morrow's release point has dropped and moved laterally by a few inches.

Morrow made his own emotional adjustment, as well, a change that some hard throwers never make: He decided to ease up just a little, just enough to help his fastball command and give him a better chance to throw strikes.

This one isn't supported as much by the evidence, but we can see hints of reduced velocity if we poke around. Morrow's average fastball in August, for example, was 92.7mph. His offspeed pitches seem a little slower than they were earlier in the season as well.

And they may be right. Here's what I find so interesting, though:

"I thought, 'I can't do that anymore,'" [Morrow] recalled. "I wasn't going to be that guy who didn't throw strikes."

Morrow's walk rate has come way down, but at the same time all we see is a one-point increase in strikes. That's one more strike per 100 pitches thrown. If Morrow was that guy who didn't throw strikes before, he's pretty much still that guy who doesn't throw strikes now. He's just somehow been able to turn that into a dramatically reduced rate of free passes.

One contributing factor could be that his contact rate is around 75% since May 10th, as opposed to 70% before. More bats have been finding more balls, maybe ending at bats earlier. But then, his strikeout rate hasn't changed at all.

It's always interesting to me when a guy sees big swings in walk or strikeout rate that don't seem supported by swings in strike or contact rate. What, exactly, has Morrow been doing differently from the early part of the season, given that he hasn't been throwing that many more strikes? His first-pitch strike rate isn't any better. The whole thing is curious.

Finally, one other thing that seems worth noting in addition to Morrow's different arm angle and pitching intensity:

Morrow's backed away from his fastball by a pretty significant amount during his post-May 10th run of success. You'd think someone would've cared to mention this.