This was an interesting matchup. Or rather, this was not an interesting matchup, at all. But the idea of this matchup was interesting. Here we had the Seattle Mariners hosting the Cleveland Indians on the 2nd of September. The Mariners, of course, were previously organizational darlings. They were said to have one of the strongest and smartest front offices in the game, and they became so much of a sleeper pick to be the next great team that they didn't count as a sleeper anymore. The Jack Zduriencik Mariners were going to do wonderful things.

Opposing the Mariners were the Indians, who, you might remember, were these Mariners before these Mariners became these Mariners. The Indians of a few years ago had Mark Shapiro as their general manager. They had Chris Antonetti whipping up databases and practically sleeping in them. They had smarts, and a bunch of young talent, and all the right philosophies. The Indians were a team on the rise, and writers and internetters alike fell all over themselves to label them as perhaps the best organization in baseball.

Tonight, the Mariners and Indians clashed. And it didn't matter for shit.

The much-hyped Mariners sit in last place. The previously-equally-hyped Indians sit in last place. This might as well have been Jobriath having drinks with Todd Van Poppel. I think a lot of people tend to have short memories about this stuff, and many have forgotten how high was the Indians' pedestal a little while back, but some of us remember, and for us, you could say this game was a lesson of sorts. A lesson about hype, about overconfidence in our opinions, about our unwillingness to change what we already think. Here were the Mariners - the on-field product of one of the most hyped front offices I've ever seen - facing a team that once was them, a team that has since sank back into irrelevance. It was hard to shake the feeling that we might've been looking in the mirror, or into the future.

I'm not saying the Mariners are doomed. The Indians, for one thing, came a win away from the World Series in 2007. For another, the M's are working with a significant financial advantage. And lastly, this is only the second year of the Zduriencik administration, and there's a lot of talent hanging around the upper levels. The M's may very well go on to fulfill the expectations and aspirations so many of us have had for them over the past calendar year.

I just found the juxtaposition a little chilling is all. I still do. I mean, I watched this game, and I have an angle. I have something interesting about the gameplay to write about. Using the familiar PITCHfx tool at Brooks Baseball: 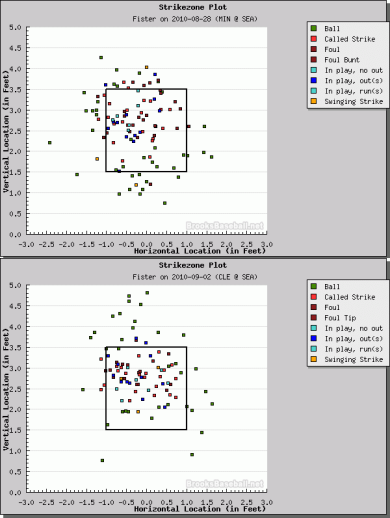 That's Doug Fister's pitch location last week on top, and Doug Fister's pitch location tonight on bottom. You notice anything? Tonight, Fister couldn't locate anything down - especially in the game-changing sixth inning. Everything he threw was elevated. There was no changing of the Indians hitters' eye level, because practically every pitch was at the same level as the pitch before. That's unusual for a guy who's supposed to throw at a downward angle and keep the ball on the ground. It was also unusual that Fister only threw 52 fastballs out of 96 pitches. Was something bothering him? Was his back hurting? Was his arm hurting? Did he not trust his fastball? Was this all a conscious decision to mix things up?

The Indians put 20 balls in play against Fister, and only four of them stayed on the ground. Something interesting happened with Doug Fister tonight. But rather than explore what might've gone on, and rather than discuss whatever implications this may have, after the game I got up, did the dishes, and asked myself "who cares?" What's the point of reviewing Doug Fister's start on September 2nd of a season in which the Mariners are 30 games below .500? He didn't throw a no-hitter. He didn't sprint off the field holding his elbow. He didn't throw anything 100 miles per hour, and he didn't throw anything 50 miles per hour. He just had five decent innings, and then a bad inning, and it doesn't matter, and because it doesn't matter, why write much about it?

It's been an existential few hours. Tonight, we watched a game between two of the most hyped organizations of the decade. These teams were supposed to be the cream of the crop. And after the game, all I've been able to do is philosophize, since commentary and analysis just seems so very...not irrelevant, but insignificant, and unnecessary. Who wants to read about this game? Who really wants to read about this game?

Indians fans must be loving this. Indians fans have been warning us about this possibility since the Mariners first started drawing positive attention. Maybe we'll end up getting the last laugh. Or maybe we'll end up laughing with them at the next vessel that fails to float.