A Brief History Of Ichiro's 200th Hits, And The Meaning Of His Record

Share All sharing options for: A Brief History Of Ichiro's 200th Hits, And The Meaning Of His Record

I feel bad that I'm not even amazed anymore. You know why I'm not amazed? Check out the following table, which shows the timing of Ichiro's 200th hit each season, along with the opposing pitcher just for funsies. 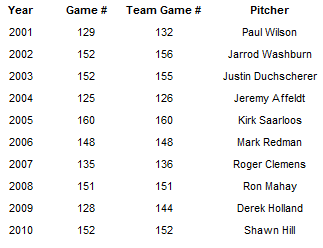 That's why I'm not amazed. Ichiro's taken his pursuit of 200 hits into the final week just twice, and he hasn't done it since 2005. This is actually the latest in the year that he's hit the mark in the past five seasons, and the team's still got another ten games to go.

200 hits in ten seasons - ten consecutive seasons - is, of course, a counting stat record. It isn't a record like, say, Hank Aaron's 14 seasons with an OPS+ over 150, or Ted Williams' .482 OBP. It's the kind of record we'd even make fun of if it belonged to someone else, like Michael Young or Derek Jeter. "So he hits a lot of singles," we'd say, "and he rarely ever walks." We'd call the record overrated.

Which, well, that's fine. I suppose the record is overrated by some. It certainly isn't the first bit of evidence I'd go to in proving that Ichiro's been a magnificent hitter his entire career. At the same time, though, it isn't a record totally lacking in meaning. Nevermind that 200 hits is a counting stat. Nevermind that it's dependent on swinging at a lot of pitches and staying near the top of the order. What are the things you need in order to post ten consecutive seasons with 200 hits?

Seems to me, there are two kinds of records. There are some records that prove, or at least strongly advance, a particular argument. Ted Williams may be the best hitter of all time. Pedro Martinez may be the best pitcher of the modern era. And so on. These records tend to be a little more scientific. Based on rates, usually, and frequently adjusted for something.

And there are other records that serve as opportunities to celebrate. Opportunities to reflect on someone's performance and recognize just how much he's been able to do. This is where I put Ichiro's string of 200-hit seasons. No, I wouldn't take this record into an argument or scholarly debate. But knowing that Ichiro just picked up #200 this morning gives me a chance to acknowledge how magical the little guy is.

In some ways, these sorts of records are less meaningful than the first, but in other ways, they're not. After a while, once they've established their performance baselines, we tend to take superstars like Ichiro for granted. We expect them to churn out a bunch of statistics, and when they do, we're satisfied, and when they don't, we're concerned. Records like these help us break out of our routines. They allow us to truly appreciate a player for all he's been worth.

Maybe we'll go back to taking Ichiro for granted tomorrow. Maybe it'll happen over the weekend. It's going to happen at some point, for all of us. This record let us take a break. It let us snap out of it. Just for a moment, it pulled the velvet rope and let us observe the lack of visible brush strokes on the Mona Lisa. That's really a hell of a painting.