Feel free to consider this a companion piece to Dave's latest at USS Mariner.

When discussing the upcoming winter and the 2011 Mariners, it helps to keep the budget in mind. And by helps, I mean it's essential. Otherwise, you would post many stupid comments about how we should just sign every free agent out there.

Here then is a rough guide to the 2011 Seattle Mariners' payroll. Players with long-term contracts are obviously the easiest to pencil in. I made some estimates for the arbitration eligibles but we actually do not have many of them. David Aardsma, Brandon League and Jason Vargas were the only meaningful ones.

Most of everyone else is filler; either people currently at the top of the depth chart or those that I project to be by April 2011 unless the team signs someone else. This isn't the place to argue whether Rob Johnson will be the backup catcher over Josh Bard or which players from Tacoma's bullpen will make the roster and which will not. This is the place to argue the salary numbers and the team's backup catcher isn't likely to make significantly more or less than half a million and the back of the bullpen isn't likely to be much more than minimum salary guys. Differences of a hundred thousand or so are marginal. 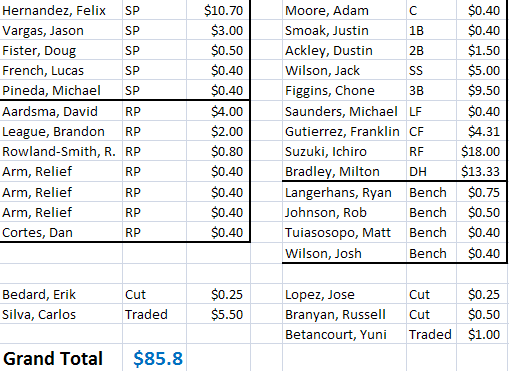 The Mariners opened this season with a $91.1 million payroll. If you assumed the same budget for 2011, the front office would have only $5.3 million to spend and that's an assumption that I would wager against. Seven million in money spent on players not with the team certainly hurts, as does Bradley's $13 million. It would be fantastic if he could return to being a worthy bat in 2011 and contribute something of value.

Special Dustin Ackley note: I list his salary at $1.5 million due to his draft contract. I do not know whether the Mariners actually account for it the same way they do other salaries. What I do know is that I counted it in the $91.1 million total for 2010 so you can remove it from consideration and it does not affect anything.