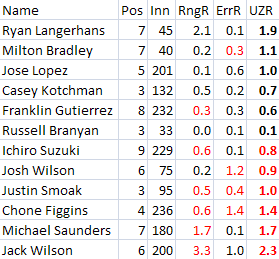 Total team UZR for the month was a below average -2.7 runs. Of course these are small samples of highly volatile measurements so picking out individual players is plain incorrect to do but I have to wonder, if Ryan Langerhans played this well while on his head, would somebody finally notice him?

Kudos, Casey, for the good month. I wonder how the rest of the season would have played out had that come in May instead of July. It's likely too late for you to avoid being non-tendered given your arbitration reward but you will probably get another bench shot next year. I doubt you will be handed another opportunity like you had this season in Seattle to start full time and it's sad that your chance was derailed by a lot of horrendous luck, but keep plugging away and you might get that playing time back somewhere else.

The power went away for Michael Saunders but I absolutely love seeing the 11 walks to 16 strikeouts. He's displaying all the talent he's had in the minors. If he manages to coalesce them into one consistent skill set then we will really have something on our hands. A good left fielder. That is the something. Cheap too!

Russell Branyan posted a high BABIP and still was bad thanks to 23 strikeouts in just 58 plate appearances. His contact rate took a nosedive again which is Branyan's bellwether for hitting success. Hopefully it was just small sample noise and possibly his injury.

Chone Figgins still suffered from a depressed BABIP given his recent norms but keeping that walk to strikeout rate near 1 helps him out. So does that home run. A home run!

Those last two lines are incredibly poor and Justin Smoak certainly did very little to prove himself worthy of being in the same parcel exchange as Cliff Lee but he is unlikely to maintain such a historically bad strikeout to walk rate. As for Franklin Gutierrez, it was an overall bad month for him, but the .177 BABIP propelled it to the worrying slump stage. I too wish he had stayed at the level he played at in April, but I am not too worried. Under a normal BABIP month, Guti nets an addition nine or ten hits. That's in one month. That's nearly 100 points of batting average.