Why Evaluating Starts Can Be Hard

Share All sharing options for: Why Evaluating Starts Can Be Hard

In the bottom of the sixth inning yesterday afternoon, the Twins had one on and one out against Luke French and Delmon Young at the plate. Young fouled off five pitches and wound up behind 1-2 in the count when he got an offspeed pitch and hit it into left for a double. Doubles are bad. However: 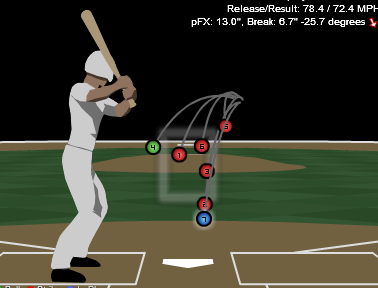 Everyone knows that sometimes good pitches get hit and bad pitches don't, but it's good to have a reminder every so often of just how little control a pitcher can actually have over a game. Things even out given a sufficiently broad amount of time, of course, but in small samples like individual starts, just basing your evaluation off raw numbers can be misleading. Consider this pitch. Consider that game Ryan Feierabend had against the Red Sox a few years ago where every ball in play was hit to the warning track. Pitchers are hard to figure out over full seasons. Over single starts, it is sometimes a nigh-impossible task.