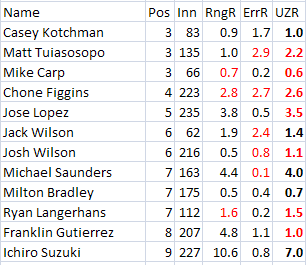 Total team UZR for the month was a decidedly average +1.6 runs. The range and error UZR figures are from the whole season as I previously did not break them out into monthly installments. The UZR column is for June only. I ditched DRS as it became apparent there were serious issues with that data or formula or something.

The table speaks mostly for itself. For June it was a rather mixed bag with Michael Saunders, Jack Wilson and Ichiro Suzuki being the only positives that we really care about. Milton Bradley continued to show that he's not a liability in the field, but fielding wise, that was never our concern. Our timidity toward having him play the field has always been about his injury prowess.

It might be tempting to freak out over Guti's negative rating, but remember this is just one month of UZR data, something around 5% of what you want in terms of a decent sample. There's going to be flukes. Remember how Jose Lopez led the entire league in fielding after April? Yeah, sort of like that.

On the whole, this is about what we figured we would get, a team of rangey fielders with the only disappointment being Chone Figgins and that some of the range scores aren't even higher. With more range comes more errors so it's no surprise to see more red numbers there. It is also no surprise that Matt Tuiasosopo sucks.

Thank you Ichiro for keeping this from being an almost completely useless month. Russell Branyan and Tui also posted above average hitting lines but did so in a combined 25 trips to the plate. Meanwhile Eliezer Alfonzo proved why he sucks, Casey Kotchman continued to not catch any breaks (.188 BABIP) and Josh Wilson reminded us all why he's Josh Wilson. Of course, he also hit a ton of line drives according to MLBAM, so who knows. Try hitting them over the wall, maybe?

June wasn't just a sad month for Franklin Gutierrez with his UZR ratings, he was atrocious at the plate, costing him a lot of his early season value with the bat.

Rob Johnson had the highest walk rate on the team of any semi-regular. That's good for Rob Johnson because when he walks as much as he did in June, he becomes decently useful as a player. League average hitting catchers are very hard to come by and so no matter how bad his defense is, he would grade out well. Still, on a team built around patience, it makes me feel a little queasy when Rob Johnson is pacing them all in walks. If you're not going to hit nearly literally any extra base hits, you might as well draw more walks, Chone.