Walk-off wins are an interesting phenomenon, in that they're kind of anti-baseball in a way. They're sudden. They're exhilarating. There's nothing about them that's slow or deliberate or calculated or subtle - they just happen, and half the people celebrate, and half the people don't, and everything's over in a flash. They provide a rush unfelt by fans in the overwhelming majority of the games they watch - games they watch knowing full well that the odds are they're just in for a standard, unexciting nine innings.

And if walk-off wins are invigorating, then walk-off comeback wins are an absolute, unparalleled delight. You know one of the big reasons so many people love playoff hockey? The games keep going until somebody wins, even if the teams require five extra periods. Playoff overtime is among the more nerve-wracking, compelling sporting circumstances in the world, and the sudden-death goals become instant classics. The hit that delivers a walk-off comeback win is the closest that baseball comes to a hockey goal in overtime. It isn't just about the result. It's about the context of the winning play, the suddenness of it, the surprise, and the negated possibility of things going the other way. For all intents and purposes, Franklin Gutierrez hit a sudden-death single.

That was a good feeling. For us, and for them. And honestly, I wonder if people in our position might not enjoy these things more than the people who follow or play for a good team. Those people have a higher baseline feeling, and higher expectations, possibly leading to reduced satisfaction. For us: who saw this coming? How long has this been coming? How great does it feel to pull out a win in a game the M's have lost like two dozen times? 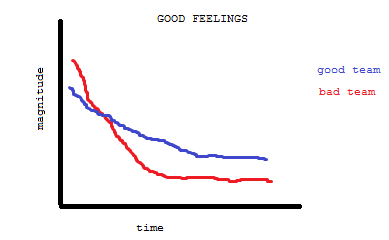 A bad team gets the higher good feeling peak after a walk-off, because for them these things are less frequent and more of a relief. A good team gets the lower good feeling peak but sustains the good feelings for longer, as the context settles in and the significance of the game becomes apparent. At first, celebrating a walk-off is all about the game just played. While that game's going on, that's the only game that matters, and the big picture is at least momentarily forgotten. That's why the M's got to celebrate their 37th win as much as they did. But I think their and our excitement may fade sooner than it would for a good team, because as much of an exciting relief as it was, it doesn't take long to remember, oh yeah, everything else.

That's just a hypothesis, though. What really matters is that, if nothing else, a 37-58 ballclub just provided one of the biggest highlights of the season. Watching a bunch of happy Mariners smile and jump around and beat the crap out of each other never gets old. It just never gets old. Walk-off wins are a treat.

I only caught the last few innings of this one, so I don't have a whole lot to say. The big points: