Share All sharing options for: May Report Card: Position Players 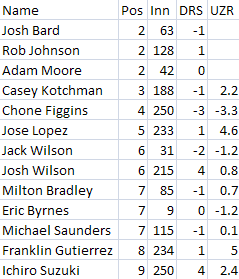 Total team UZR for the month was a respectably good 10.1 runs. Plus/Minus wasn't as enthusiastic, reversing their roles from April. Gutierrez and Jose Lopez both saw their UZRs begin to catch up with their impressively high DRS totals. In fact, speaking of Jose Lopez...

Hey pinhead! These numbers are based off an incredibly small sample and do not mean that Jose Lopez is actually a better defensive third baseman than Adrian Beltre. Stop thinking they mean that!

However, Jose Lopez still holds a lead over Beltre in the defensive numbers for 2010. Beltre certainly closed the gap in May, but Lopez is holding on. Meanwhile, Beltre has a .378 park-adjusted wOBA and Lopez is at .269. Granted, Beltre isn't hitting for more power or walking any more. His wOBA is inflated by a .381 BABIP.

Chone Figgins has not impressed either visually or statistically at second base which is a shame. It's a good thing that Lopez has been so good while at third otherwise we'd have to be having rants about the obviousness of moving those two back to their pre-2010 positions and the Mariners not doing it because who knows why, followed by us ranting more, followed by them still not doing anything, followed by us finally getting over it, followed by them calling up a reliever for no reason, followed by us using that pretext to rehash the whole thing all over again. Ugh, now I'm tired just from the hypothetical. Or maybe from the fried chicken I just ate. 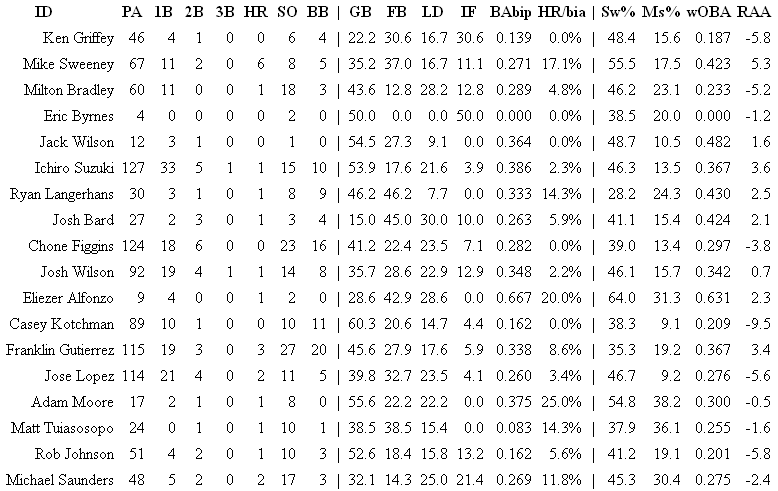 Click for full size. Mariners wOBA for May 2010. Source StatCorner.com