A Quick Word On Jose Lopez

Share All sharing options for: A Quick Word On Jose Lopez

We can talk about Ken Griffey Jr and Mike Sweeney all we want - and, make no mistake, those two are problems - but in all honesty, this offense is going to be a source of discontent until some of the guys who're supposed to hit start hitting. Milton Bradley's gotten it going of late, so he's exonerated from blame, but we've still got Chone Figgins hitting .209, and Jose Lopez hitting .233 with one home run. Nobody expected big big things out of either, but even given Figgins' ability to walk, that pair has been dragging us down from the top of the order.

What follows is not a comprehensive analysis. I barely have any time today, and I'm not even going to go into what might be wrong with Figgins. But when it comes to Lopez, I want to present to you a few images, courtesy of TexasLeaguers.com:

There you see Lopez's spray chart for the first month of each of the last two seasons. Below, you can see his full-season hit chart from 2009: 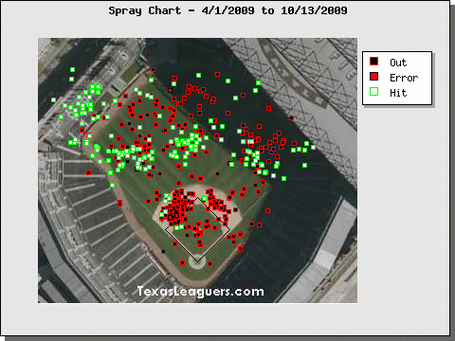 We used to make fun of Jose Lopez for the fact that pretty much all of his power came on fly balls he yanked down the left field line. Power down the line is the crutch of the weak. But so far in 2010, we haven't even seen that. Lopez has pushed his balls in play further to the right - or at least, the balls in the air - and he isn't strong enough to make that work. Remember that his one home run barely got out in a hitter-friendly ballpark.

It's not that Lopez isn't pulling the ball. He's pulled 54% of his balls in play to left field so far, against 53% a year ago. But he's putting more of them on the ground, and fewer of them in the air down the line. That's bad news for a guy we can't quit batting cleanup.