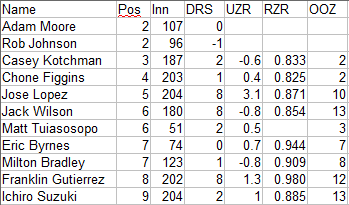 The Plus/Minus system really seems to love out of zone plays. And if you take the RZR and OOZ totals are reasonably accurate then holy wow is Franklin Gutierrez great. We all already know that, but it's nice to keep finding new ways to be reminded of it. It's like having your significant other understanding that you've had a rough week so he or she wakes you up with your favorite breakfast. Aww, that's so thoughtful of you, Frankie. Now stop striking out so much.

No matter which system you liKe (provided it's one graphed above), they all agree that Jose Lopez has been fantastic with the glove to start the season. That's pretty incredible. Who would have actually thought this would happen? Want a comparison? Of course you do!

Hey pinhead! These numbers are based off an incredibly small sample and do not mean that Jose Lopez is actually a better defensive third baseman than Adrian Beltre. Stop thinking they mean that!

However, Jose Lopez has, over the aforementioned stupidly small sample, performed at a Beltre-esque level. We salivated during the Spring over having Chone Figgins and Jack Wilson up the middle. If Jose Lopez ends up eclipsing the rest of our infield I might just retire from ever making predictions because that's about as big a slap in the face a prognosticator can get.

Overall, the snapshot shows no real weaknesses which we have discussed before but is always worth noting because that's fun and it's about the only fun part of this team's April performance. Milton Bradley, who is roughly average, might be our worst fielder aside from our catchers who are difficult to evaluate. The Mariners rank first in DRS, sixth in UZR and second in RZR. 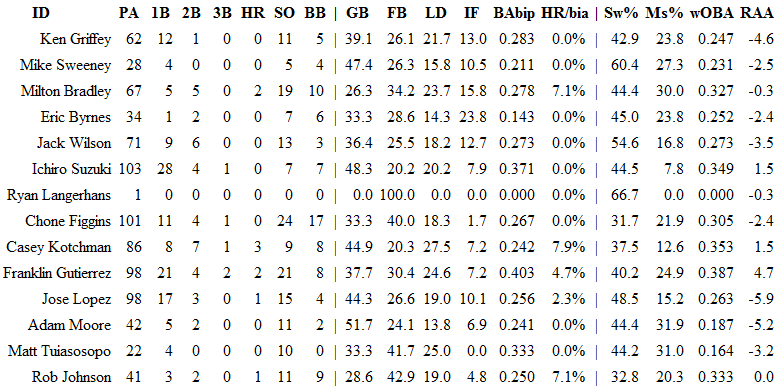 Peppered around Seattle are a series of billboards pondering different possible causes for Seattle's higher than average rate of multiple sclerosis. Maybe the city's inability to have any sports team that generates offense is a reason. Or maybe it's a consequence. Maybe all our athletes get MS from living here. And somehow that only affects their ability to hit/score. And then it goes away, as MS does, when they get traded and that totally explains why players always get better after they leave Seattle!

As a nod toward Jeff, I will refrain from discussing individual BABIP rates and instead just point you toward my post on the team's regressed wOBAs here.