A long time ago in a land far, far away (San Diego), I was in attendance at a Brewers-Padres doubleheader that illustrates the point I wish to make. This was a scheduled doubleheader, when such a thing still existed. Kevin Brown pitched the matinee and was his typical dominant self. In addition to helping his own cause by driving in the first two runs of the game, Brown took a no-hitter into the 7th inning. I had brought a friend from work and we were sitting in nice club-level seats behind home plate. Easy access to alcoholic beverages may have made what came next inevitable. I glanced at all the goose eggs on the scoreboard and made an idle comment:

"Brownie's throwing a gem," I said. My friend barely missed a beat in reply.

Audible groaning was heard and someone muttered "jinx" in the row behind us. I closed my eyes and lowered my head in resignation.

Brown promptly issued a a two-out walk, then Jeromy Burnitz broke through with a first-pitch grounder up the middle for a base hit. Brown then struck out Darrin Jackson on three pitches to retire the side before finishing a complete game one-hitter. My co-worker and I retired to the bar between games (another *benefit of the double-dip--no cutoff of alcohol sales during the first game), where I took him to task for jinxing the no-hitter, a feat that to this day no Padres pitcher has accomplished. With that August afternoon in mind I offer this companion piece to your LL viewing enjoyment, in hopes that future generations may avoid a similar misunderstanding.

*may lead to being removed from the premises in the 9th inning of the nightcap.

Jinx (baseball): Saying the words "perfect game" or "no-hitter" in the ballpark in which said effort is still in progress. The terms "perfecto" and "no-no" carry equal weight as jinxes.

Lesser offense: Saying one of the above phrases while watching or listening to the game broadcast.

Much lesser offense: Writing the phrase in an online game thread/message board. 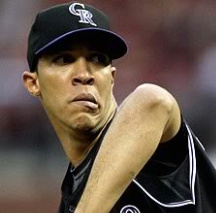 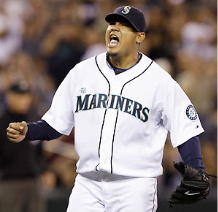 1.  In Friday's game, after King Felix struck out Adam Everett to end the top of the 3rd, Dave Niehaus said, "Felix goes 1-2-3 and is perfect through the first nine hitters" as they went to commercial.

The added qualifier is no caveat; Niehaus said the word "perfect" in relation to the game Felix was pitching and this is a jinx. At the top of the 4th he again referenced Felix's performance and said to Mike Blowers, "I'm not even going to say the words," either not realizing he already had or trying to unwind the hex. Austin Jackson immediately singled to open the inning, naturally. If you jinx a perfect game you have "whistled past the graveyard" and jinxed a no-hitter as well. This offense sits one rung down on the jinx hierarchy: an announcer saying the words during the broadcast, superseded only by a player or coach saying "perfect game" or "no hitter" in the dugout. The latter would result in an unimaginable fine in players-only Kangaroo Court.

Oblique references to a no-hitter are acceptable, however, including "blank slate", "clean sheet", "working a gem", "trying to make history" or simply showing a shot of the scoreboard. Referring to a perfect game in progress is dicier; an announcer may cite the number of batters up and the number retired.

2.  During yesterday's no-hitter by Ubaldo Jimenez, with none out in the 7th, Rockies CF Dexter Fowler made a spectacular diving catch of a Troy Glaus liner. The Braves play-by-play announcer said aloud that the catch saved the no-hitter. Two important aspects of a perfect game or no-hitter are evidenced: in any no-hitter or perfect game someone has to make an unlikely defensive play to save the bid, and a broadcaster or fan rooting for the other team cannot inflict a jinx. Congratulations, Ubaldo! Your announcers know better.

3.  Jinxes apply to pitching performances. In last night's game, Ichiro came to bat in the 8th needing only a home run to complete the cycle. But nobody avoids mentioning "hit for the cycle". It is perfectly acceptable to walk right up to a player and say, "Hey man, you only need a double for the cycle." No worries. Why one is jinx-worthy and the other isn't I can't say for sure. Maybe because the cycle is an oddity as much as it is an incredible feat. Can you remember where you were when any player hit for the cycle? I can't, but I remember where I was when Randy pitched his no-no and when Mike Cameron hit home runs in his first four at-bats against the White Sox.

Those are the basic ground rules, from which various permutations extend. Go in peace, walk lightly, and don't jinx the hometown nine.