Ryan Rowland-Smith in the past has typically thrown his change up about 16 to 20% of the time. You might remember the change up as a pitch that is important to getting opposite-handed hitters out. Well last night, Rowland-Smith faced 25 of them which not coincidentally was also the number of batters that he faced all game. Every hitter Hyphen faced batted from the right side.

That's an extraordinary tough situation for Ryan as his best weapon is his curve ball and breaking balls are much more beneficial against same-handed hitters. Right-handed hitters get a better perspective on a lefty's curve and it forced Ryan into relying on his fastball and change to work through the Tiger lineup. That's usually a recipe for scariness because Rowland-Smith's fastball is pretty pedestrian. He usually commands it fairly well, but it isn't all that fast and it doesn't have all that much movement so it's not a strikeout or ground ball pitch.

Hyphen threw 53 fast balls and they were predictably manhandled. Nearly half went for balls which was probably a good thing because the of the ones put into play (ten in total), six were hit for a line drive. Just twice did a hitter swing and miss on a fastball and just once did a hitter hit one on the ground (notwithstanding an additional one via a bunt). Without having to worry about the curve, the Tigers sat on Rowland's fast ball and waited to feast on it. His change up was going to have to be effective to get through the game.

And effective it was. Roughly doubling the frequency that he normally threw it, Rowland-Smith tossed 30 change ups and it was nearly an unqualified success. 18 of the 30 were in the strike zone and he nabbed four swinging strikes. Only six were put into play and half of those were on the ground. Two others resulted in pop ups and just one went for a line drive. Below is a plot of his location on change ups thrown last night. 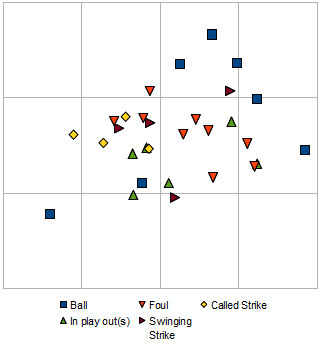 The scales are not exactly proportional and the regulation strike zone roughly correlates to the middle two boxes. Hyphen kept hitters honest with change ups to the outer half, mostly resulting in fouls. When he did go inside with the change, he had success getting strikes up in the zone and getting ground balls down in the zone. That up and in grouping is what made this outing for Ryan.