A Glance At The Leaderboards

Share All sharing options for: A Glance At The Leaderboards 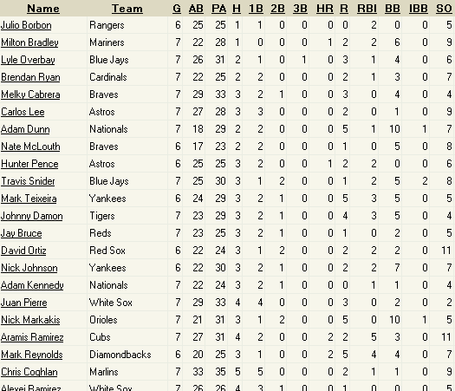 Milton Bradley has yet to produce. Of that there's no secret. He has all of one hit in 22 at bats, and while Rajai Davis is the reason he doesn't have two hits and two home runs instead of one and one, we'd still be talking about two hits, in 22 at bats. That's bad.

But look at some of the other names on that list. Dunn. Lee. Markakis. Damon. Ortiz. Bruce. Teixeira. Pence. And so on. It's not like Bradley is one of two or three big-time players having a rough go of it early on. He's one of a bunch. You could practically field an All Star team made up of sub-.200 batting averages. Players struggle, and while Bradley's getting attention because he's Milton Bradley, and because nobody else in the lineup is hitting either, it'll take a lot more than a bad week to convince me that he's in trouble.  One week doesn't prove a thing.

What about his strikeouts, you ask? It's true - Bradley's early contact rate is well below his established track record. But then, the same would apply to Ortiz, and Grady Sizemore, and Aramis Ramirez, and Kevin Youkilis, and more. It's a week. It's a week. And Bradley does have six walks. He actually has a higher OBP and a higher SLG than Jose Lopez.

The reason Seattle's supposed to be a better place for Bradley to play than Chicago is because Seattle is less inclined to make mountains out of molehills. So let's go ahead and give Bradley a break, at least until everybody else is producing. For the time being, it doesn't make any sense to single him out, because our entire offense has been terrible.