Share All sharing options for: Milton Bradley Is Annoyed

ARLINGTON - Mystery of the night at Rangers Ballpark: Did Milton Bradley offfer a rather impolite one-fingered salute to Rangers' fans? According to internet chatters, Seattle's Bradley didn't flip his lid during the game, but did flip something else.

The moment in question happened in the fourth inning after Chris Davis flied out to left field, where Bradley was playing. Though TV replays showed no incident, broadcast officials did say it appeared Bradley offered the gesture towards the stands. He was booed after the play. 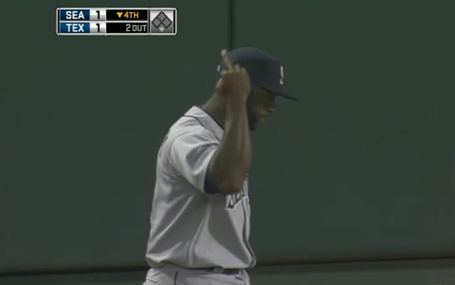 Like Milton, I don't really consider the middle finger a big deal. However, I know a lot of people do, so this is a pretty bad way to not get negative attention.

(Note to fans of other teams that may conveniently choose to drop by: shut up. You didn't "show us." This isn't an incident. It's practically nothing.)