Third Box Score Of The Year

Share All sharing options for: Third Box Score Of The Year

Hoyer: Hey there. Dayton? It's Jed.
Moore: Yes, this is Dayton.
Hoyer: Hey, I know we're both busy guys, so I'll get right to the point. You see what we did today?
Moore: Who is this?
Hoyer: Jed Hoyer. We beat the Mariners today - beat 'em big - and we beat 'em without Adrian Gonzalez.
Moore: Who?
Hoyer: I was just thinking - sometimes going without that one star player helps everybody else step up, you know?
Moore: Moyer?
Hoyer: I think there's something to this, that teams really come together when they can get out of the shadow of a clubhouse superstar. Which is why I wanted to talk with you about Zack.
Moore: Jamie Moyer?
Hoyer: You deal Zack and you get Gil stepping up as a leader, you get Banny stepping up as a leader, you get the other guy stepping up as a leader-
Moore: How you doing, Jamie?
Hoyer: I'm not Jamie Moyer.
Moore: I wanted to ask, you willing to dangle Polanco? Love that guy's skillset. Great leader.
Hoyer: Jamie Moyer doesn't run the Phillies.
Moore: What about Romero? I'd love to add to the bullpen and George has got everything we need.
Hoyer: George Romero isn't on the Phillies.
Hoyer: George Romero doesn't play sports. 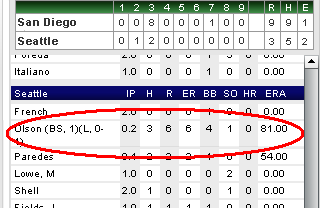