Second Box Score Of The Year

Share All sharing options for: Second Box Score Of The Year

Interesting to see Matt Stairs, Ryan Garko, and Tommy Everidge all go deep in the same game, as, handedness aside, they all share the same player profile. They all shared the same literal profile too until Stairs went and lost 31 pounds this winter. Mentioning what Stairs accomplished in four months at the age of 41 is a great way to make your adult friends feel like shit. Also worth noting that Stairs has managed a career .839 OPS over parts of 17 seasons despite never really trying to get in shape. You know why I don't care when a player reports to camp in the best shape of his life? Matt Stairs.

Congratulations to Dustin Ackley for recording his first hit as a Mariner. His first hit of 4,597. I don't want to exaggerate or put unreasonable expectations on a guy or anything but I'm pretty sure Dustin Ackley is going to be the greatest hitter of all time.

Grand slam for Everidge, by the way. I was wondering who the Mike Morse and Mike Wilson backers would latch onto this year. Everidge is the early favorite, and not only because there's so much to latch onto.

I hope opposing managers pitch around Adrian Gonzalez all spring. That would just slay me. "We didn't want to give their best player a chance to beat us." 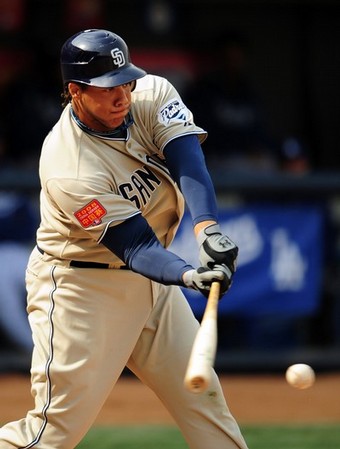 The sad thing about the Padres' inevitable Gonzalez trade is that, by moving Gonzalez elsewhere and moving Blanks back to first, they'll be taking away their only two remaining sources of entertainment. You can only count on suspending David Eckstein from wires and flying him around the infield so many times before it starts to feel trite.

Corey Patterson singled, walked, and stole a base today, and is being charged with false representation.

Greg Halman went 0-2 with a strikeout, and is not.

My understanding is that you have to register as a sex offender if you so much as mention Beamer Weems' name to a child. I have no idea who Beamer Weems is or what he looks like but I guarantee you that he's white, has a short swing, and is David Eckstein.