Making the Other Pitcher Work in 2009

Share All sharing options for: Making the Other Pitcher Work in 2009

Looking at just year-end totals for teams ignores the path taken to get there throughout the season. For individual players, we usually don't care much about that, but for teams as a whole it can sometimes be interesting. After all, they get influenced not just by random fluctuations but also by the very makeup of the team itself.

Out of passing curiousity, I ran the Mariner hitters' pitches seen per plate appearance totals, broken down by individual days. Those figures you (sort of) see marked in gray. In dark blue is a rolling 16-day average. After seeing the various peaks and valleys, I took a trip through BR's defensive lineups page and my own memory and picked out some possible contributing factors to the more drastic changes in slopes. 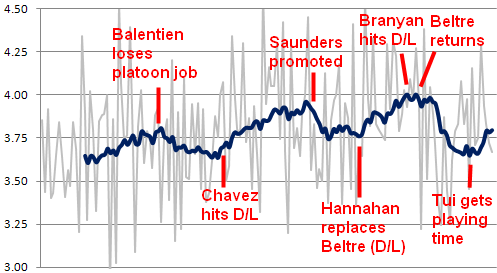 Of course these do not represent the totality of influence. If you had a team that averaged 3.75 pitches per plate appearance and then replaced one of the less patient hitters (say 3.5 P/PA) with a patient hitter (say 4.0 P/PA), that would raise the overall team average to about 3.80. There's still lots of randomness involved.