Continued from part one...

There seems to be a lot of good pizza in Phoenix for some reason. I already knew of Pizzeria Bianco of recent Playboy fame, but the place we ended up at dinner, Cibo, was fantastic and some of the best pizza I've had in recent memory for a very fair price given the size, ingredients and quality. A quick scan through Urbanspoon's list of best rated Phoenix-area restaurants reveals a lot of pizza joints. Good Mexican? Naturally. Good southwest? Duh. Good pizza? In Phoenix? Who knew?

Saturday we ventured out to Goodyear to watch the Texas Rangers "visit" the Cleveland Indians. First, we stopped for breakfast at the wonderful Tj's in Avondale, a true southwestern diner dive. 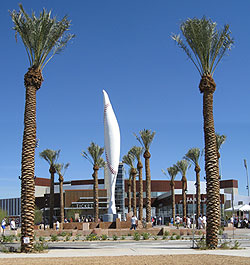 If you've spent any time in that region, you know what I mean. The sort of place that you sort of have to get either biscuits & gravy or chicken friend steak at and it sets you back about $7. If you're ever in the area, I highly recommend it. Don't order a full serving of biscuits and gravy though unless you're splitting it with four people. Seriously. It might as well be an entire cake with sausage gravy in place of frosting.

Goodyear Ballpark has an interesting sculpture near the entrance resembling a baseball-shaped joint (see photo). I like weird public art like that; I think it gives places character. Also, it's easy revenue as they were selling replica statues of it in the gift shop. Another thing that Goodyear Ballpark has, and something that had been on my mind since Peoria, was margaritas. Yes! It's in the high 70s, it's brilliantly sunny and I'm back in the southwest, I wanted a margarita and Goodyear delivered with an affordable $8 version that was not overly watered down. Baseball, as it's meant to be watched.

There was some baseball played that afternoon as well and I'm sure it fascinated those in attendance who were prospect hounds. Carlos Carrasco, Justin Smoak, Max Ramirez, Michael Brantley, Julio Borbon, Carlos Santana and others all made appearances. Justin Masterson started for the Indians and mowed down six in three innings and change. Brandon McCarthy started for the Rangers and walked quite a few people. Somehow the Rangers won in a shutout, which was not at all how the game seemed to be going on an individual at bat level.

Nothing in particular stood out to me about the game, though I will toss in a few more random tangents. Between innings, I noticed a PA ad for a local auto dealer. Given how many tourists are in town to watch these games, and that this game featured teams from Texas and Ohio, how many locals were actually there? How many people was this ad actually reaching? Would it make more sense for some Texas or Ohio-based companies to advertise?

A lot of people did not seem to realize there was a giant scoreboard. I heard many people asking who was hitting. Even some that knew of the scoreboard's existence managed to be hilarious. At one point in the game, a lady behind us was talking to someone and the score of the game came up. They exchanged guesses as to the score and then she looked over to confirm that it was currently 5-0, but instead of just reading the big, bold runs column, she went inning by inning, counting up the runs. Just bizarre all around.

But not as bizarre as what happened toward the end of the game. During the last few innings, some of the starters who got pulled early felt the need to keep loose I suppose and began jogging around the warning track. I might mention that the game was still going on at this point and it continued along whilst Elvis Andrus and company got in some laps. Spring Training baseball! It matters!

After that, we drove to Tempe to visit ASU and catch a collegiate game between them and Auburn. I have to say that the Tempe area seems a lot nicer than the other area of Phoenix that I visited. It had a bit more architectural flair to it and seemed to have more of the landscape integrated into it rather than just paving over everything with asphalt. They also have the Chuckbox, a great and cheap burger joint staffed by a cook with a great ability to hold 10+ orders in his head without writing anything down.

The game itself was my first college baseball game I've attended and I'll say, they look pretty short. And by look short I mean were short because on average the players were noticeably below professional athletic builds. ASU had a second basemen, Zack MacPhee, who might be 5'4" and was fun to watch for his stat line coming in (seven triples in 12 games) and for his performance during the game at the plate with a 2B and a monster HR* and also in the field. At one point, MacPhee dove for a grounder up the middle that he had no prayer of reaching and literally as soon as the ball got past him, he pounded his fist into the ground. It was a display of instantaneous grittiness that made even the poster of Willie Bloomquist hanging on the stadium proud.**

*Aluminum bats are stupid. Great point by a FanGraphs writer: why don't MLB teams subsidize the NCAA to use wood bats? College teams won't switch to wood because of the cost, but MLB has oodles of cash and as it stands now, they all know the aluminum makes it harder to scout, and so they trip over themselves sending scouts to the few summer wood bat leagues. Why not just save money by cutting those out and pass that along directly to the NCAA to get them shift to wood bats? You'd get so much more good scouting information, not to mention the added safety bonus.

Thoroughly baked (from the sun) and exhausted from nine hours of watching baseball over a 30-hour span after having not seen a baseball game in person in about six months, I came back to Seattle. Taking light rail back from the airport, I stepped out of the bus tunnel and was hit by a cool breeze coming in from the water of Elliot Bay. It was a bit cloudy, somewhere around 50 degrees but I could smell saltwater. Home.