The Best And Worst Rotations In Mariner History

Share All sharing options for: The Best And Worst Rotations In Mariner History

Inspired by a comment from Goose in the thread below, I decided to take a look at how the Mariner starters have done every year since 1977 against the league-average performance. I used FIP for what should be obvious reasons, and though these numbers aren't park-adjusted, they should be close enough. Safeco and the Kingdome have opposite home run effects, but the end result when you calculate it out isn't a huge change, and I'm not even going to bother trying to figure out how the Kingdome affected strikeouts and walks. This isn't a journal article. 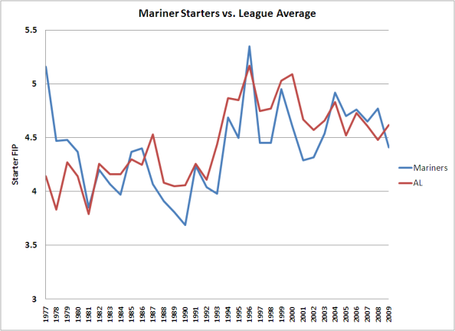 The neat thing here is that we don't have to worry about park adjustments at all, because a Kingdome rotation leads the way anyway and adjusting for park would only broaden the gap. The '93 Mariners gave 88 starts to Randy Johnson, Erik Hanson, and Chris Bosio, all three of whom were great, and they didn't give too many innings to anyone terrible. Adjusting for park would flip #2 and #3, so we can take this chance to recognize the good work of Hanson and Matt Young while avoiding having to say anything about Aaron Sele.

The league-average starter FIP in 1977 was 4.14. The best FIP by any regular Mariner starter was Tom House, at 4.55. To expansion! And congratulations to Bill Bavasi on constructing the worst non-expansion era rotation in franchise history. Incredible to think that that happened (A) with Felix Hernandez, (B) after trading for Erik Bedard, and (C) after handing $48m to a free agent.

How does the 2010 Mariner rotation project when compared to other rotations in team history? Well, it's kind of silly to run these numbers now considering the team may still add a starter and we have no idea who's going to get hurt or replaced, but if you go with Felix, Lee, RRS, Snell, Vargas, Olson, and Fister all picking up innings and you use their CHONE-projected FIPs, you end up around -10%. This also uses the CHONE-projected innings for the first five guys and giving the rest to the latter two, along with a 4.59 league FIP (weighted average of the last four years).

Sorry for that unreadable paragraph. Basically, the 2010 Mariners have a chance to showcase the best starting rotation in team history, but in order to do that, they're likely going to need Felix and Lee to combine for 450 innings. Alternatively they could get a breakthrough from Snell or land someone from outside the organization, but then you still have to deal with park adjustments, aaaaaaaand the bottom line is that having the best rotation in team history, when you're competing against 33 other rotations, is hard.