I nearly forgot about this one. Whoopsie.

Prerequisites for understanding: None

How Do We Compare a Catcher to a Shortstop?

The concept is easy enough to understand. Different positions on the field require different skills to play, and some are inherently more difficult than others. Catcher is harder to play than left field, and shortstop is harder to play than first base. We can easily accept an argument for accepting less production out of certain positions as an acknowledgment that the pool of players who can adequately play said position is small. Not convinced? Observe pitchers batting in the National League and see if they're held to the same standard as the position players.

The real question is not that we need to adjust our expectations for players at the various positions, but by how much. There are a number of ways we can compare between the position. What if we took average offensive production from each player at each position and compared them to one another? We could get a good idea of the acceptable performances from a second baseman as compared to a corner outfielder that way, and on and on until we have a good idea about the relative offensive level at each position. Right?

Well, yes. It does give us a good idea about the relative offensive level from each position, but what comparing batting between positions does not tell us is how defensively difficult any of the positions are. In order for the hitting statistics to be able to inform us of requisite defensive skill at a position, we have to make three big assumptions:

Whoops. For now, let's regard the positional adjustments derived from looking at offence alone as accurate but perhaps not accurate enough. Furthermore, there's no reason to use offence as the measurement of defensive difficulty, since the positional adjustment should really be something close to a fundamental truth of baseball rather than being based on how good a set of hitters we have at a particular position. Can we do better looking elsewhere?

Yes. Since players move around (albeit infrequently) from position to position, and we have decent defensive measurements, we can compare positions more or less directly. Well, most positions: we have the problems of dealing with infield to outfield and the issue of left handed players not being able to play third base, shortstop, catcher, and second while being favoured at first. But these things can be taken into account by tweaks to the calculations, and after some work you (by you I mean Tom Tango) end up with the following values for our positional adjustment (in runs per 600 PA): 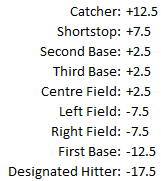 Please, please note that these values are not set in stone. You could tweak a lot of the numbers up and down by a run or two and nobody would bat an eyelid. This is a guideline, and while it's close it's not perfect by any means. The second thing to pay close attention to as that those are run values per 600 plate appearances. In reality, while plate appearances will obviously dovetail pretty closely with defensive chances, it's not an exact match. We're also exposing ourselves to a significant selection bias by only looking at players considered capable of moving around the diamond. Furthermore, these adjustments look at the sum of raw defensive ability - they don't take into account how an individual position stresses different tools (arm is more important in right field than left, for example). None of these points are enough to recommend not using the above values, but as with everything we look at, the holes in the model are instructive.