Thoughts on the Roster

Share All sharing options for: Thoughts on the Roster

With yesterday's Ryan Garko signing, the roster's looking pretty crowded. Check it out: 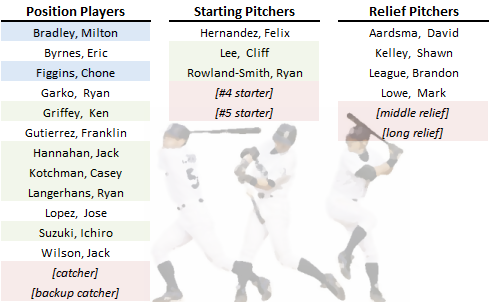 Blue for switch hitters, green for left handed hitters/pitchers. Red for anyone who's not definitely on the roster right now (I have no idea who out of Moore, Johnson, and Bard will be dropped, for example). First thing to note, of course, is that barring surprises we will be going with an eleven man pitching staff. This is a pretty big deal, but it's facilitated by having an extremely strong top of the rotation. Lee and Felix should be able to ease up some of the pressure on the bullpen, allowing for the possibility of using six guys in there as opposed to our customary seven.

Furthermore, the composition of the guys in the mixer for the last bullpen spot helps out too. We have an absolute wealth of back-of-the-rotation guys, most of whom are left-handed. We also have Nick Hill, another lefty, who could be a not-awful swingman right now. This means that (assuming Sean White is broken and not going to be back), we will have two guys in the bullpen with enough durability to throw a few innings without exploding or anything. The only worry is that we're not going to be able to mix and match to exploit platoon splits in the late innings, but compared to the benefits of us going to a five-man bench, that's not that significant.

It's a good thing, too, because the presence of Ken Griffey Junior at DH (even if you believe he'll be starting, you have to accept a platoon) breaks the four man bench. If we think of the 'typical' bench as a backup catcher and a bunch of utility players, ours must accommodate a player who can't do anything but hit. Going with a four-man bench means that you have a catcher, a DH, and just two utility guys to cover for everyone else. This is a problem for a team as prone to being as banged up as ours. In essence, by going to an eleven-man staff, we're just getting our fourth bench spot back.

With this said, there are a number of secondary comments I'd make which could alter all of the above. When Garko was signed, it immediately 'felt' to me that there were too many outfielders and not enough infielders on the roster, and I wondered whether Langerhans might be better off being replaced with Matt Tuiasosopo. This essentially replaces a spare outfielder with a spare infielder, which seems like things are more balanced. Langerhans's contract permits this, but he has to be put through waivers to get to Tacoma as far as I know. Unfortunately, this system is flawed in that it essentially forces Milton Bradley into the field more often. My uninformed feeling is that Griffey is the home DH against RHP, with Bradley playing left. Away, with Langerhans on the roster, Bradley is the DH against everyone, with a Langerhans/Byrnes platoon in left. This doesn't work without another left-handed outfielder, and I'm strongly in favour of restricting Bradley's outfield time (and Griffey's anything time).

Another interesting idea is to use Garko as the second catcher. This free us up to go back to a twelve-man staff or to add a Tui-type player as the second backup infielder. We'd also be able to put up some relatively potent lineups out there when we need offence the most. After all, Garko has significant playing time behind the plate in the minor leagues, all the way up to AAA. The problem? Garko hasn't caught regularly for a few years, and it's questionable as to whether he could handle quasi-regular duties behind the plate. It would also stop him being used as a pinch-hitter, which isn't as big a problem as one might think given Wakamatsu's pinch hitting tendencies (or lack thereof). This is something the Mariners might consider playing with in the spring, but it's unlikely that it works. It'd be a really neat little scenario if it pans out though.

And honestly, I think that's the only real way we go back to a twelve-man staff. If a starter gets hurt on a road trip and we face a couple of lefties, we're boned with the four-man bench. I think Griffey really tilts the balance in the favour of having six bullpen arms, and with the personnel we have in the pitching corps, it makes pretty good sense. Although Figgins can fill pretty much anywhere in in case of emergency (our set of position players is bizarrely versatile, which could be a full length post in its own right), we're seemingly better off going light on the bullpen, at least to start.