Share All sharing options for: More on David Aardsma

Note: If this isn't particularly coherent or intelligent, please lay your blame squarely on Jeff's shoulders for stealing my brilliant idea for tonight's post.

A little over a year ago, David Aardsma was acquired from the Boston Red Sox for middling minor league starter Fabian Williamson. Nothing earth-shaking in a mediocre reliever being traded for roster filler, but you all know the story: Brandon Morrow's command imploded and Aardsma ended up being our closer for most of the season, doing a pretty good job (I am spoiled after J.J.), especially considering both his cost and the low expectations laid on him. Now he's expected to anchor our bullpen again. What might we expect from him?

David Aardsma ran a tRA+ of 120 last season, so it's not like much of his 175 ERA+ wasn't helped by the defence. However, it was a genuine improvement over his career results: the bulk of his work prior to 2009 had him as a slightly-below-average relief pitcher. What changed? Is it sustainable, or did Aardsma fluke his way into a good season last year to set us up for some hilarious Morrowing in the future?

We see an uptick in strikeouts and a slight decrease in walks, which along with a raised swinging strike percentage shows that he did genuinely pitch better in 2009. However, the most notable difference in his component stats between last year and the previous ones is his HR/FB rate, which dropped to 40% of his career rate. Check it out: 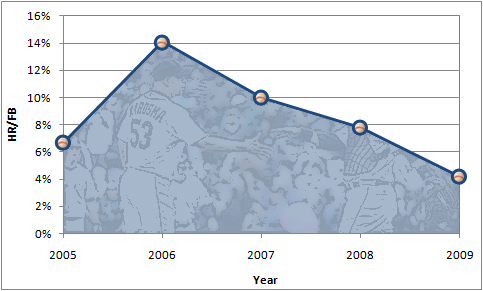 Since preventing home runs on balls hit in the air doesn't turn out to have much to do with pitcher skill, it would be pretty understandable to be skeptical of Aardsma's ability to continue being a good closer in 2010. If that HR/FB rate want back up to his career norms, he goes back to being an adequate reliever rather than a guy you want on the mound in high leverage situations. However, I suspect it will not - and furthermore, I suspect the Mariners knew that his HR/FB would fall beyond what one might normally expect from the effect of Safeco Field.

As you all know, Safeco represses right-handed power significantly while giving left-handed bats a bit of a boost. Normally, this effect serves to benefit the Jarrod Washburns of the world, who can get lefties out just fine but are mauled by righthanders. One wouldn't expect a rightie closer to be particularly helped out here, especially since higher-leverage relievers see more elite opposite handed batters than usual. But there's a pretty important twist here.

Aardsma is only an extreme fly-ball pitcher against right-handed batters. For his career, he's running a GB rate of 40.2% against lefties vs. 31.2%(!) for right handers. Furthermore, his HR/FB rate has been much higher over his career against right-handed hitters. With this in mind, it shouldn't come as any surprise that his rate of giving up home runs plummeted upon arrival in Seattle - and I have to imagine that the Mariners knew this when they acquired him. If you wanted to doubt him based on his fluky-looking numbers last year, I'd give those numbers a little bit of a closer look. It's unlikely that he limits home runs to quite the extent that he managed in 2009, but expecting him to regress to his career numbers or to league average seems like it'd be more than a little unfair.