(and the perils of not paying attention)

Most of you are aware that Fangraphs has recently added splits to the site. If you weren't, yay I just made your day more awesome. Go to Fangraphs player pages and you should find a tab labelled 'splits' up at the top. Enjoy.

It will surprise nobody that Loafie is better when he's pulling the ball. When he goes the other way, he's lucky to get a silly little flare fall in for a hit, but his swing puts a charge in the ball when he hits it to left field. What's the difference between his production on batted balls hit to the left, the right, and up the middle? Now that we have wOBA splits, figuring this out isn't very hard at all: 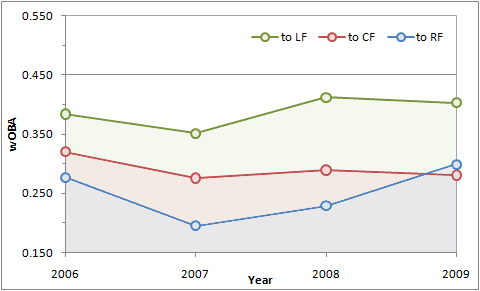 Wow! A wOBA over .400 to left field for the past two years? Hovering at below .300 elsewhere? His right field wOBA in 2007 was particularly noteworthy, standing at a comical .195. Clearly this is a goldmine of writing, I said to myself as I composed the 'Jose Lopez should pull pitches even more and he'd be totally amazing' post in my brain.

Running a quick check on Lopez's wOBA against balls hit to left/balls in play gave a R² of 0.01.

Fortunately, I had a nagging feeling that something was else wrong, so I checked out some other right-handed (now-ex.) Mariners to make sure I wasn't going totally off the rails. Turns out that I was, and that putting up a wOBA over .400 to left field isn't even close to impressive for a right-handed hitter, primarily because of the combination of power and one's plate appearances being pre-selected to not contain strikeouts. Silly me. Let's take a look at the other two: 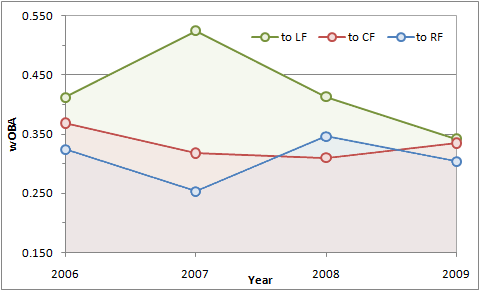 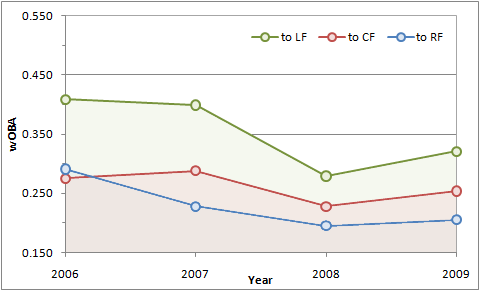 The first thing I noticed here is that Kenji Johjima's 2006 batted ball profile and Jose Lopez's 2009 are essentially identical. I think the biggest difference is something like .06 points of wOBA in Kenji's favour on balls hit to left field or something crazy. Note that this isn't any sort of prediction about Lopez falling off a cliff come 2011, but it's eerie how similar Good Kenji and Good Loafie are as hitters.

I had to rescale all of my graphs to deal with Beltre's 2007. Thanks Adrian! Way to make Lopez's measly .412 wOBA feel bad. Only beat it by .113. Beltre's a much better hitter than the other two, at least in terms of being able to do anything without pulling the ball to left. But like the other two, his main source of power is to left field, and that's what seems to plummet when things are going badly for all of them.

While I still don't have a good feel for the scale of these graphs, they're at least fun to play with. But playing with the numbers reminded me of an important lesson: don't jump to conclusions before you're completely familiar with the data at hand. Otherwise you'll make silly mistakes and waste a lot of time.