The Washington Nationals signed free agent lumberjack Jayson Werth to a seven-year contract this afternoon, taking the entire baseball world by surprise. In an offseason where people have laughed at players like Carl Crawford and Adrian Beltre for their contract length demands, the Nationals decided not only to meet Werth's demands, but to exceed them in a negotiation maneuver that is without a name on account of it's unprecedented and stupid. It's a move that's pissed off executives around the league, but I can think of a few folks who're delighted: 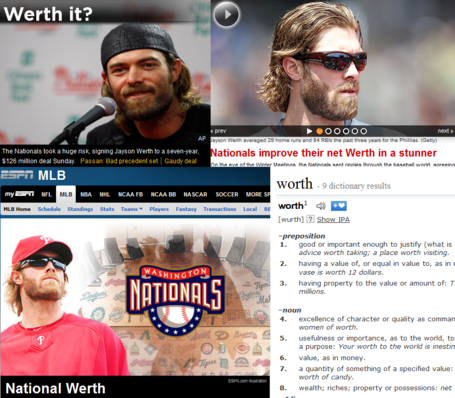 That Werth signed with the Nationals means a few things. For one, it means the Nationals should get a little more attention at the Winter Meetings, provided they can still afford the tickets. The Werth signing made a statement, and as crazy a statement as it is, players and agents love this sort of thing.

For two, it means Werth didn't sign with the Red Sox. The contract, of course, is silly, but as far as I'm concerned, the fewer elite-level players there are on my least-favorite teams, the better. Carl Crawford's still going to sign with a team I can't stand, but he's only one really good outfielder, when it could've been two. The Nationals are the perfect destination. I don't have any reason to care one way or another about the Nationals, and probably never will.

For three, it means we have our snark material. The internet thrives on snark, and while sometimes that snark isn't warranted, it's had to justify giving Werth a seven-year contract. This isn't a retarded, brainless, franchise-crippling move, but it is a pretty bad one that deserves to be mocked with an appropriate level of humor.

And for four, it means this is probably a good offseason for the Mariners to not have much money to spend, because the middle- and upper-tier markets appear to be inflated. One wonders if guys like David Aardsma and Chone Figgins might not look a little more appealing now with the market suddenly paying out so much money. If you're looking for the Mariners to have an interesting week, this could be how it happens.

What a wild few days it's been. And to think, the meetings haven't even started.