And Now You're Thinking About Josh Wilson On Christmas Eve

Share All sharing options for: And Now You're Thinking About Josh Wilson On Christmas Eve

Josh Wilson was drilled 12 times last season. On its own, that isn't exceptional; he ended up tied for tenth in the league. What makes it interesting is that he ended up with far fewer plate appearances than the other names on the list, and what makes it even more interesting is that none of his teammates came close to matching him. Casey Kotchman, Chone Figgins, Jose Lopez, Ichiro, Milton Bradley, Jack Wilson - they were all hit by three pitches apiece, and that tied them all for second, nine behind Josh.

Josh Wilson stood in and wound up getting beaned way more than any teammate, and more than most any other player in the league. That's interesting, and since there's no reason why pitchers would make a point of going after the lil cutie, one wonders if this is all about survival on Wilson's part. One wonders if it's deliberate. He doesn't have any power. He doesn't spray line drives. He doesn't have a great batting eye. Getting hit by pitches is a way for him to get on base, and the more often Josh Wilson gets on base, the more likely it is that he can stick.

You can kind of see it here, as we compare Wilson to Franklin Gutierrez, who was hit just once: 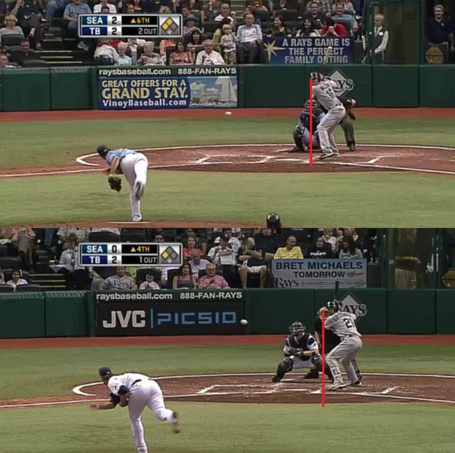 Not only is Wilson's front elbow closer to the plate - it's tucked in a little such that his shoulder gets in there as well. One would assume that, based on this image, Wilson gets hit most often in the shoulder and arm, and the PITCHfx data bears that out: 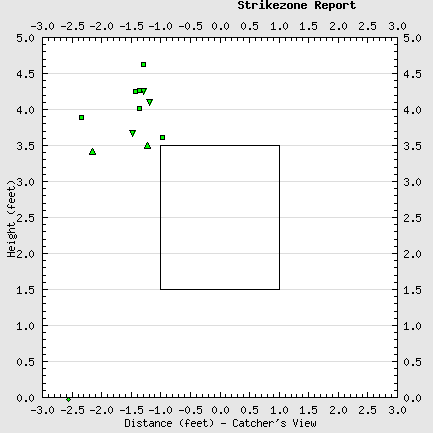 What's disappointing is that Wilson came ever so close to joining some exclusive company. Over modern baseball history, only four players have ever had a season in which they were hit more often than they were walked (minimum 10 HBP). Wilson wound up with 12 beanballs and 14 walks. Even so, his was one of just 14 individual seasons with a difference of two or fewer. He joins other such luminaries as Pat Meares and the inimitable Mike Kinkade.

We've always known that, for some guys, getting hit is a skill. Biggio, Kendall, Jason Giambi, Carlos Delgado - this isn't new news. What makes this a bit more notable is that, at the plate, it might be Josh Wilson's only skill. It sure was a year ago.

By whichever means, I guess.