Same drill as before. Pitchers are a lot harder to judge. Not only are they more variable, but the formula for converting what they do into wins is a lot trickier.

I'm not going to attempt to break down the bullpen as there's far too many players involved so I grouped them by basic roles instead and collect the players in my head around what I figure their talent is. For instance here I have two middle reliever (MR) roles, one at a 1 WAR/150 and one at 0.5. In that first group goes the Dan Cortes / Shawn Kelley / Josh Lueke types who I expect to be good. In the latter group is the pitchers who get promoted out of the long reliever group because they've improved in 2011.

The chart is a little different this time but the same concept. Instead of games, it's innings and instead of WAR per 162 games, it's WAR per 150 innings thrown. Also included is the same poll. I'd like to add that if you vote for either the too high or too low option, I'd appreciate a comment as to why. 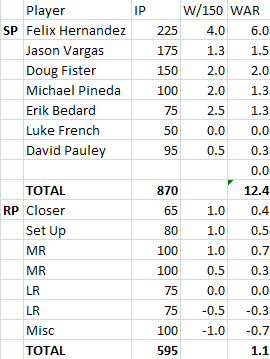 I might be more bearish on Jason Vargas than others, but I see a lot of his 2010 success tied up in preventing home runs. I think he regresses to between 2009 and 2010 levels of performance.