I have been curious for some time how the division is stacking up. Some of you will remember my divisional projections from last season. I will be rehashing those in the near future, but in the interests of trying to improve the accuracy and transparency of my thoughts I have decided to greatly expand how I compute the projected totals.

These still rely almost totally on my guesses. I took each position (aside from grouping the outfield together) and broke it down to two or three deep with some estimated playing time for each player. Then adding in my projected WAR per 162 games played, arrived at a guess for each player.

The chart of the hitters is below the jump along with some explanations of my thoughts to be updated as the thread evolves. I've also included a poll to gauge the community reaction to the win numbers. Consider these to have fairly large margins of error. If you vote for either the too high or too low option, I'd appreciate a comment as to why. 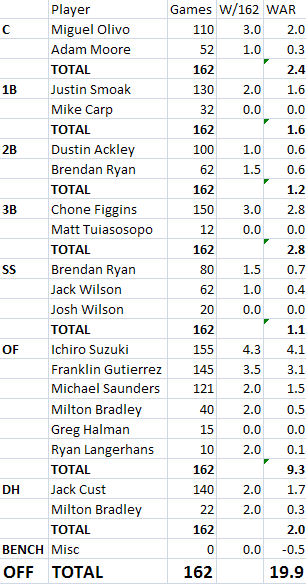 I don't expect much offense out of Dustin Ackley this season and figure he will accumulate some value through playing time and position. I anticipate Brendan Ryan beginning the season at second base before taking over short stop.

I didn't allocate any time to the bench but pencil in a half win deduction for injuries, defensive subs, and other miscellany related to this being a team from Seattle.