Not that I think Jose Lopez thinks about these kinds of things, but as a 27 year old former top prospect, there's a little more dignity in getting traded than in getting non-tendered. Getting non-tendered means your old team was sick of you. Getting traded means that at least one other organization thinks you're kind of all right, no matter what it gave up in exchange.

It makes sense that it would be Colorado - for as long as we've heard that the M's were looking to move Jose Lopez, the Rockies were pretty consistently the only team said to have interest. There's clearly at least one guy in that front office who thinks that Lopez's skillset is a good one, and the kind of offensive skillset that can work in Coors Field. Not that there's any offensive skillset that couldn't work in Coors Field, but Lopez should have more value there than he did here, since there he won't be shitty.

There, he could actually help. I don't know what job he's going to have, or how many games he's going to play, but Miguel Olivo just posted a .765 OPS with the Rockies last season, and Miguel Olivo has maybe the worst approach to hitting of any established bat in the Major Leagues. Too often Lopez looks like he doesn't know what he's doing, but he can get away with not knowing what he's doing there more often than he could in Seattle. It's not impossible that Lopez could get his career back on track. A few home runs could build a little confidence, and a little confidence could go a long way. But even if Lopez blossoms into a good player, one must consider whether he ever would've done it in Safeco. This was obviously not a good fit.

The guy we got back in the trade is Chaz D. Roe. This is what he looks like:

He's 24, and he's a righty, and he's a pitcher, and he starts, and he throws a low-90s fastball and a curveball and he had a 5.98 ERA with AAA Colorado Springs. Colorado Springs plays in a launch pad, so that ERA is inflated, and Roe does have a chance to be something someday. He was the 32nd overall pick in 2005, after all. But he's probably nothing. I don't know what Roe's like as a guy - this is obviously a big day for him - and I feel bad for being so dismissive, but the odds are good that we'll never have to learn his name. He may not even last the offseason on the 40-man roster, should space need to be made for acquisitions. All Roe is, for the time being, is the guy who's better than nothing, because had the M's non-tendered Lopez, they would've gotten nothing.

This day isn't about Chaz D. Roe, though. This is about Jose Lopez, and the fact that, even though the M's technically traded him to Colorado, he was, for all intents and purposes, dumped off at the age of 27, because, just a year removed from hitting 25 home runs, the M's didn't want to risk having to pay him three million dollars. That hints at a spectacular collapse, and indeed, Lopez's 2010 season was that bad. We haven't seen many seasons worse, and we certainly haven't seen many seasons worse from a guy many figured was just coming into his own.

Remember when Asdrubal Cabrera was sent away in large part because he was blocked in the middle infield by Yuniesky Betancourt and Jose Lopez? I don't bring this up because it wasn't true. While Cabrera shouldn't have been discarded as he was, he was most definitely blocked by two good young talents. I bring this up because it's amazing how swiftly and dramatically some things can change. Yuni's now 28, and Lopez is 27, and they have a combined OPS of .694. Both of them were supposed to be cornerstones. They've turned into internet punchlines.

For all the talk and all the jokes about Lopez's weight and motivation, I don't buy it. I don't think that he's lazy, and I don't think he struggled to develop because he got fat. He made his share of brain farts, to be sure, but I think the effort was pretty much always there, as was the drive. Lopez cares. Lopez wants to be good. I think the bigger problem is that he just doesn't know how to get better. He doesn't seem to understand what it would take for him to improve or adjust, and so he just goes up there trying to do what he thinks he's supposed to do given his slot in the lineup. If some batting coach can get him to figure out what to do with different pitches and give him a better game plan, more power to him, but Lopez showed zero progress in that department as a Mariner. Zero, in seven years.

Jose - I'll miss watching you in the dugout after games, but I won't miss watching you on the field during them. You've been nothing short of maddening, and while I wish you the best in Colorado, I will shed no tears over your departure. If you need help with your braces, I recommend Comfort Dental. 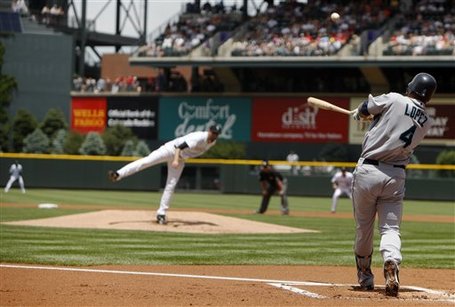