What follows will not come as new information to any of you. This is intended more as a reminder than anything else as we prepare to head into next week's Winter Meetings.

Right now, it looks like the Mariners are going to have a pretty low-key offseason. Jack Zduriencik, of course, is no stranger to the sudden blockbuster, and he may end up swinging a deal that drops Chone Figgins or nabs Justin Upton. It's not out of the realm of possibility that the M's again make themselves big-time players in the market. However, the probability is that they by and large stay out of it. They'll make a few moves, and might even bring in a second- or third-tier starting pitcher, but it's unlikely that we're going to see anything eye-catching.

And that can be frustrating to think about for fans who just saw this team lose 101 games and often score less than the Sounders. For six long months, the Mariners weren't only terrible; they were terrible to watch, which put them in the worst of all quadrants: 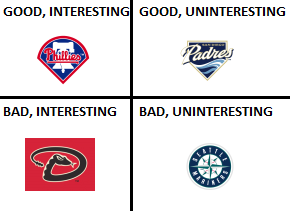 After a season like 2010, fans want to see change. Big, sweeping change. We're probably not going to see big, sweeping change. But don't let the lack of big market involvement trick you into thinking that the organization isn't serious about getting better. There are internal solutions who could and should get big opportunities in 2011, barring something unforeseen. Consider that:

The Mariners' offseason mobility is currently limited. Certainly, they're limited in part because guys like Jack Wilson, Milton Bradley, and Chone Figgins are borderline untradable. But they're also limited because they don't want to block some of the young talent they already have. Ackley, Smoak, and Pineda - these guys are potential stars. Moore, Saunders, and Cortes - these guys are potential regulars. And 2011 stands to be an important season for each and every one of them.

The Mariners were as bad in 2010 as they were in 2008. Maybe worse. But the difference between now and then is that now there's potential help coming from the system. After 2008, the front office needed to have a busy offseason to put together a respectable roster. After 2010? Not so much.