Felix Hernandez won the Cy Young Award in 2010. He was a deserving winner though probably not the most deserving. Given how much scrutiny his season underwent in the run up to the Cy Young vote, it would be difficult to uncover something overlooked about his season that's worth pointing out for my retrospective series. Instead, I offer you this chart looking at Felix's last four seasons. 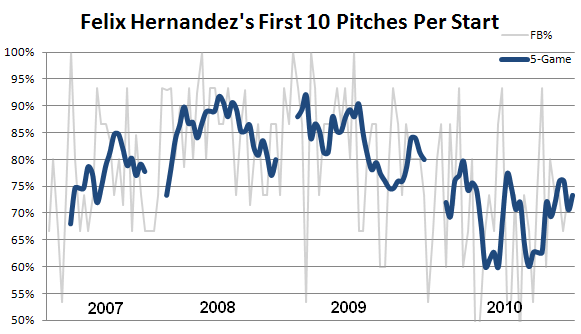 If there's one single criticism we have had of Felix Hernandez over the years, it's his proclivity to develop a fetish with his fastball, especially at the beginning of games. This is not a phenomenon confined solely to Felix, but he was perhaps the most infuriating case because his off speed pitches were and are so incredibly strong. Felix's fastball is his worst pitch and he was throwing it the most often.

That peak dip in 2007 by the way roughly corresponds with Dave's letter. You'll notice a decent dip afterward. Of course, that progress didn't last and Felix ramped up the fastball usage in 2008 in the midst of a rough season for him. His walks shot up 51% and his ground ball rate dropped 15%. He missed fewer bats and found the strike zone less often. Two out of every three pitches (65.9%) Felix threw in 2008 were fastballs, a career high.

2009 began and ended much the way 2008 did in terms of fastball usage, but Felix matured in other aspects and his fastball command improved slightly. He was still predictable to begin games, but he mixed pitches up a little better after the first inning and was simply overall a better pitcher in nearly every regard.

Felix could have continued along that path and made us all happy. When asked about Felix's fastball friendliness, the answer always seemed to pivot toward the explanation about Felix needing to improve his command of the pitch. We agreed that was true, but disagreed that it was essential in the short term. We argued that varying his pitch selection was an easy quick fix while he worked on improving the command in side sessions and bullpens, away from in game situations.

That is roughly what occurred in 2009 though leaning more toward the improved command side than the finally getting random pitch selection side.

2010 however is a completely different beast. Felix's fastball rate in 2010 (60.7%) was the lowest it's been since 2007. His fastball rate in his first ten pitches per start was by far the lowest he's ever had it and lo and behold, something not-so-magical happened. His fastball got better. Forced to no longer simply sit on a predictable fastball, hitters suddenly found it more difficult to handle which is not at all a surprising development.

We trumpet process over results at Lookout Landing because while results are often random, process is predictable and you can run experiments with process to determine likely outcomes over large enough samples. Felix didn't really pitch better in the first inning in 2010 than he had in 2007-9. In terms of strikeouts, walks, home runs and extra base hits allowed, the two are also mirrors of each other.

But while 2007-9 Felix stayed at that pace, 2010 Felix turned into a monster from the second inning onward, the innings in which he watered down his fastball usage even further. Felix has a very good fastball, but Felix has a legendary slider, an unhittable curve ball and a change up that requires UN monitoring. When he trusts those pitches enough to start ballgames off with them, he could take another step forward. 2010 shows that he might be on his way there.