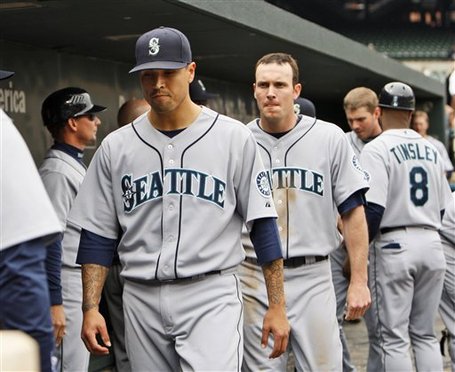 Were one to stop and consider Brandon League's 2010 season based on the simplest of numbers, it wouldn't look so bad. It wouldn't look bad at all. Nine wins? A 3.42 ERA that was more than a full run down from where it was the year before? A drop in unintentional walks + hit batters? 79 innings? That move to Seattle really did him well, one might say. What a valuable reliever he must have been.

But if we're going to reflect on the year that League just had, we must also make note of the fact that he had some really, really bad timing.

Think about it. A reliever doesn't just end up with 16 decisions by accident. League finished with a 9-7 record, and his 16 decision were the second-most of any reliever in baseball, behind only Tyler Clippard, who made eight more appearances. League earned those decisions. And he earned a lot of them by inheriting leads and coughing them up.

His worst stretch - the stretch during which he made a most unfortunate first impression - came early. Between April 7th - May 18th, League pitched in 18 games. Over those 18 games, he blew three saves, he gave away three ties, he blew a four-run lead, he made a one-run deficit worse, he picked up four losses, and he had a total Win Probability Added of -1.052. It didn't matter what he did from that point forward. No fan was going to trust him. That's what happens when you pretty much start a season with seven implosions in six weeks.

Early on, when the Mariners still had a chance, the bullpen, and League, had a lot of problems. Up top, Ryan Langerhans captures how all of us felt.