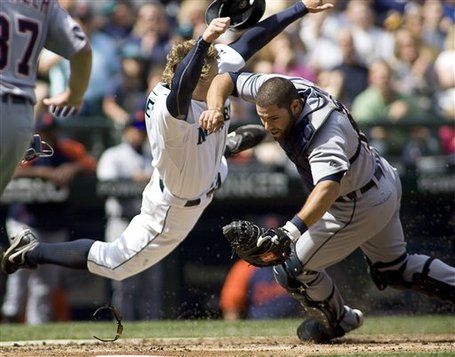 Eric Byrnes appeared in just 15 games for the Mariners, coming to the plate just 38 times. He was set free on May 3rd a day after going 0-4, and at that point Cliff Lee had only made one start. This was a month before Griffey retired. It was a month before Kanekoa Texeira went away. Casey Kotchman was slugging .440. Franklin Gutierrez was batting .320. Doug Fister had a 1.29 ERA. Milton Bradley was an everyday player. The Mariners were two games back from the division lead.

Eric Byrnes started eight games, appeared in 15, and got released on May 3rd, and still I have far more memories of him than I do of, say, Chris Seddon, or David Pauley, or Luke French, who somehow combined to throw 14% of this team's total innings.

Though his time here was brief, Eric Byrnes was a character. This is how I choose to remember him.