The Mariners, obviously, at no point played like champions, and often played like cellar dwellers. There was no single stretch that killed their season, no slump that pushed them over the edge. Recall that they did score just 513 runs all season long. But when you reflect on the year they just had, and when you consider when it became clear that it wasn't going to work, the stretch that stands out is the eight-game losing streak that began on the last day of April.

April 30th was the day Cliff Lee debuted for an 11-11 Mariners team against the Rangers. At that point, the M's were just a half-game out, and everything was looking up. But eight days later, they wrapped up a loss to the Angels that dropped them to 11-19 and 5.5 out of the West. It wasn't the pitching that did them in. The pitching wasn't great, but it wasn't disastrous. The problem was the offense. Over eight games against the Rangers, Rays, and Angels, the Mariners scored just 12 runs, getting shut out three times while hitting one home run and posting a .487 OPS. The eight-game losing streak didn't ruin the season by itself, but it did significantly increase the odds of an unpleasant outcome.

Near the middle of that eight-game losing streak was an 8-0 loss to the Rays on May 6th. The M's had already dropped five, and Milton Bradley had left the stadium early just the night before. By that point, the season had taken a nasty turn for the worse. But the slump wasn't yet complete. There was still a ways to go, and on May 6th, Ryan Rowland-Smith got shredded, and Jeff Niemann was effective, and the M's just continued to sink, losing their sixth consecutive game.

In that game, things got out of hand in the fifth. Already up 3-0, the Rays posted three more against RRS on three singles and two doubles. That made it a 6-0 game at the halfway point, and the M's were thinking about the next day. They couldn't wait to stop seeing the Rays so they could move on to the Angels and maybe start making up some of the ground they'd so rapidly lost.

Nothing happened for a little while, and it remained a 6-0 ballgame going into the bottom of the sixth. Niemann came out to the mound to face Casey Kotchman to lead off, and it was then that the Mariners had their second-most unremarkable moment of the 2010 season. After Kotchman grounded out to short on the second pitch of the at bat, he peeled off to return to the dugout, and the Mariner bat boy ran out to hand a ball to the umpire. 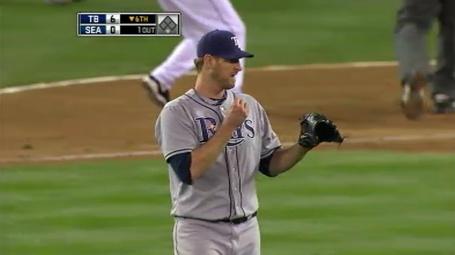 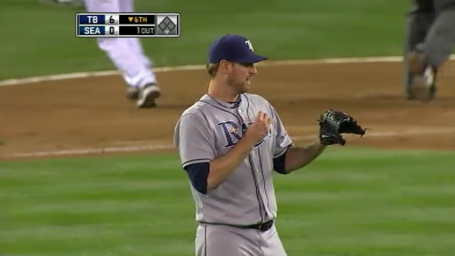