It's not that there were a bunch of blowouts, either. It was a much more frustrating sort of domination. In April, there were the three consecutive last-at-bat one-run losses. In mid-July, the M's got their win, but still scored just three runs in three games. And a few days after that, they flew to Chicago and absorbed a four-game sweep that kicked off a seven-game losing streak. The White Sox weren't consistently shredding the Mariners; they were just a little bit better, nearly every single time.

That said, it was during that four-game sweep in Chicago that the White Sox delivered the M's their one blowout. The Mariners lost their other eight games by an average score of 5.8-3.0. On July 27th, they lost 11-0. The M's were blanked by Gavin Floyd and two innings of relief, and Ryan Rowland-Smith had one of the very worst starts in memory. He allowed four runs in the first, then proceeded to allow three more in the second, one more in the third, and three more in the fifth. The White Sox ripped 11 hits and three home runs before RRS was finally pulled from the game, and his Game Score of zero was among the lowest of the season. His 11 earned runs allowed was the year's third-highest total, behind only Scott Kazmir's 13 on July 10th and Randy Wolf's 12 on July 21st.

The game was over by the second inning, and by the time Brian Sweeney came in out of the bullpen in the sixth, the FSN viewership might've been in the single digits. There was nothing to watch for. There was no chance of winning. Sweeney wasn't a compelling sort of pitcher. The lineup wasn't exactly littered with bright young talent. It was a Tuesday night, and on this Tuesday night, around 5:30 or 6, thousands of people in Seattle found something better to do.

But those same thousands of people would end up missing the Mariners' third-most unremarkable moment of the 2010 season. Sweeney had gotten an out and worked a 1-2 count against Alexei Ramirez. He then threw a changeup in the dirt, and the umpire replaced the game ball with a new one. Josh Bard threw the new ball to Sweeney, and Sweeney rubbed it over with his hands. 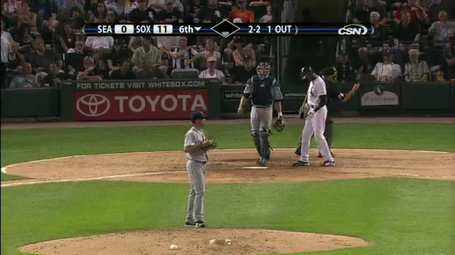 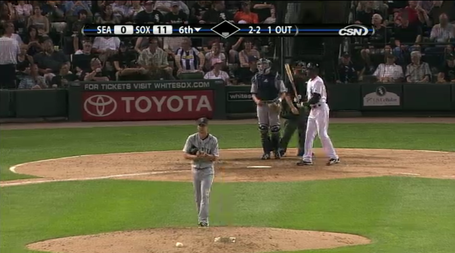