It's weird - when I reflect on Jason Vargas' 2010, I always picture him facing the A's. In truth, he only started two games against Oakland, but it feels like he started 20, with half of them against Dallas Braden. I don't know why this is, but Vargas is kind of a boring guy, and Oakland is kind of a boring team, so it makes sense that my brain would lump them together.

On September 6th, the Mariners were preparing for the second, or twentieth, Vargas start versus the A's. By this point, there wasn't much going on. The M's were neither playing well nor playing terribly, but they were 54-83, and reinforcements weren't yet coming up from AAA due to Tacoma's playoff run. And the A's were the A's - the same bland, half-decent team they've been for four years. This was a Labor Day matinee to which few were looking forward, just because there was absolutely nothing compelling about the matchup, and, hey, holiday.

The game began like so many others. The Mariners didn't hit, and their opponent did a little. Brett Anderson kept the M's off the board while the A's put a few rallies together against Vargas. A home run and a triple helped the A's post two in the first, and a home run and a double helped the A's post two more a few innings later. Behind 4-0, the Mariner dugout must've had a pretty good sense that this one wasn't going to go very well.

After Coco Crisp singled home Steve Tolleson to make it a four-run game in the fourth, Daric Barton walked up to the plate with a man on and a man out. Vargas threw over to first before looking in and throwing his first pitch of the at bat, and it was then that the Mariners had their fourth-most unremarkable moment of the 2010 season. After Barton fouled the pitch back off Adam Moore's mask, Barton stepped away, and Moore took his mask off and looked at it to make sure nothing was wrong. 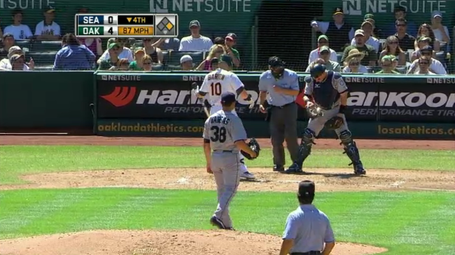 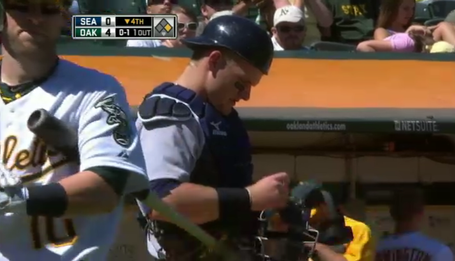