I don't know if it's true, but for as long as I can remember, it's certainly felt like the Mariners have stepped up during interleague play. They went 11-7 during 2009. 9-9 during an otherwise miserable 2008. They were just 9-9 in 2007, but 14-4 in 2006, a year in which they otherwise lost 56% of their games. Going through the logs, it seems the last time the Mariners finished below .500 in interleague play was 1999, meaning they've gone 11 consecutive seasons now winning at least as often as they've lost against NL opponents. That's a solid if unexciting streak, and it helps explain why, when it comes to going up against the Senior Circuit, I've long felt pretty optimistic.

This past summer, the M's had their major trip through the NL scheduled for June. It didn't start off so well, as they lost four of five to San Diego and St. Louis, but they closed the Cardinals series on a high note and then had good success against Cincinnati, Chicago, and Milwaukee, winning seven of nine and just doing their usual thing for that time of year. Just as there's something about playing the Angels or Rangers that always seems to bring out the worst in this team, there's something about playing much of the National League that always seems to bring out the best.

The M's got up on Sunday, June 27 looking to win their third consecutive series and pull their record to 32-43. They were scheduled to go up against lefty Chris Narveson - who at that point had a 5.76 ERA - and taking the hill on their own behalf was Jason Vargas, whose season ERA stood at 2.66. The odds seemed to be in the Mariners' favor, and spirits were about as high as spirits get for a team that's 14 games out of the race.

Unfortunately for the Mariners, the scene was all too familiar. Vargas pitched fairly well for a while, limiting the damage, but the lineup couldn't get anything going against Narveson. Through five innings, the M's had managed just a line drive single and a bloop double, and a Brewers rally in the bottom of the fifth stretched the score to 3-0. Headed to the sixth, the M's faced a three-run deficit with 12 outs to go, and all year long for this team, that was a mighty tall task.

Ryan Langerhans pinch-hit for Vargas to lead off the sixth and grounded out. It was then that the Mariners had their fifth-most unremarkable moment of the 2010 season. Facing Narveson, Ichiro took a first-pitch fastball over the plate. He then reached up with his left forearm and wiped his mouth. 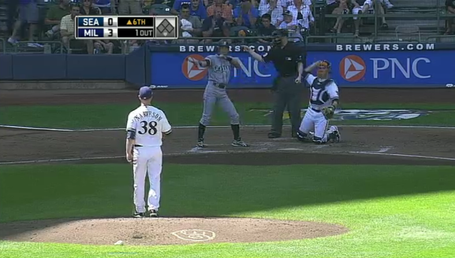 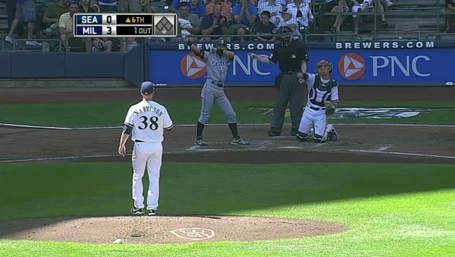 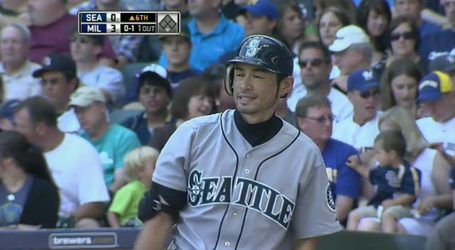